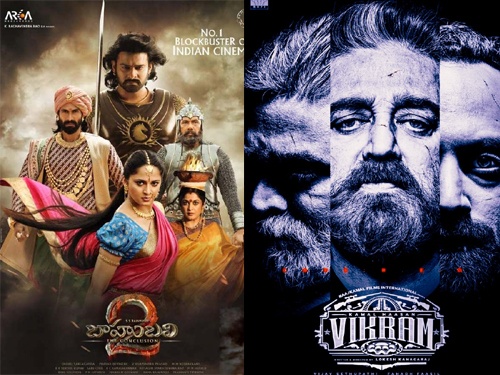 Kollywood movie Vikram, starring Universal Actor Kamal Haasan in the title role, is refusing to slow down at the box office everywhere. Having Fahadh Faasil and Vijay Sethupathi in pivotal roles, the movie is directed by Lokesh Kanagaraj.

Vikram has already collected more than Rs. 300 crores at the global box office. As the movie is running successfully in theaters, trade experts are expecting that the movie will break the lifetime collections of Prabhas’ Baahubali 2 in Tamil Nadu.

As per the reports, the magnum opus directed by Rajamouli minted more than Rs. 155 crores in the state and Vikram has already raked in Rs. 130 crores within 2 weeks. So, the movie is not far away to smash Baahubali 2 at the TN box office.

Suriya played a powerful role in this movie, which is produced by Kamal Haasan and R Mahendran under the RKFI banner. Anirudh Ravichander has rendered the soundtracks of the movie.