Vintage – Venkatesh and Soundarya on the cover page of Filmfare
Published on Apr 18, 2022 6:09 pm IST 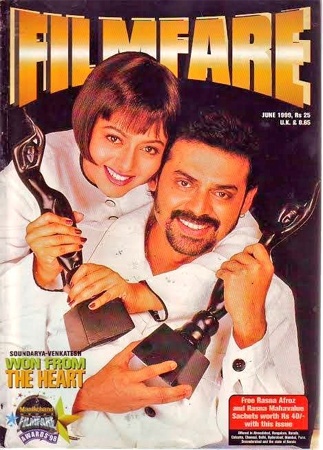 Filmfare is one of the most prestigious magazines in the country. It has been around for years together. They are also known for their popular award shows which are attended by the bigwigs of the industry.

Now, one old cover page of the Filmfare magazine has gone viral in no time. Seen in the picture are stars Venkatesh and Soundarya posing with their Filmfare trophies which they won in the year 1999.

Both Venkatesh and Soundarya have given some big hits in their career and are seen in an endearing pose together. Sadly, Soundarya has passed away now but looks so pretty in this picture.