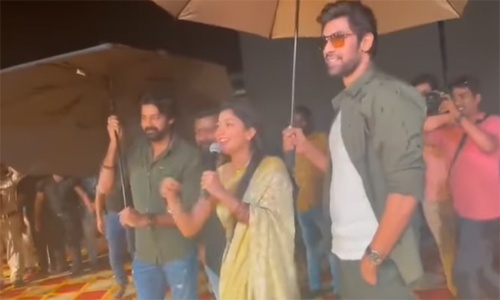 The theatrical trailer of Virata Parvam, starring Rana Daggubati and Sai Pallavi, was released at an outdoor stadium in Kurnool last night. The entire team attended the event, where an accident took place.

Due to high winds, the stage collapsed and of course, no one got injured in this accident. Later, the event was almost cancelled due to heavy rain. But, Sai Pallavi continued addressing people despite heavy rain and high winds. The video has been doing rounds on social media and everyone is praising Sai Pallavi for her love towards her fans.

Priyamani, Nivetha Pethuraj, Naveen Chandra, Eeswari Rao, Benerji, Nanditha Das and others played key roles in this movie. Directed by Venu Udugula, Virata Parvam is produced by SLV Cinemas and Suresh Productions. Suresh Bobbili is the music director for this movie, scheduled to release on June 17, 2022.