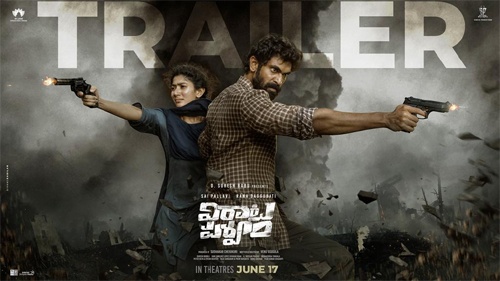 Tollywood Hulk Rana Daggubati is coming up to entertain his fans and audiences with his new movie, Virata Parvam, scheduled to hit screens on June 17, 2022. Directed by Venu Udugula, the long-awaited movie has the talented actress Sai Pallavi as the female lead.

The makers have released the theatrical trailer at a grand event in Kurnool. Going by the trailer, it is confirmed that Vennela (Sai Pallavi) falls in love with Ravanna (Rana Daggubati), a Naxalite, after reading Aranya, a book written by Ravanna. She finally meets Ravanna and expresses her love for him. Ravanna, who loves to fight for people, rejects her. What happened next? Will Ravanna love Vennela? These answers will be known in the main film.

The well-cut trailer looks impressive. Suresh Bobbili’s background score and Dani Salo and Divakar Mani’s cinematography are the assets of the movie.

The movie also has Priyamani, Nandita Das, Naveen Chandra, Nivetha Pethuraj, and others in significant roles. Suresh Bobbili has composed music for this movie produced by Suresh Babu and Sudhakar Cherukuri under Suresh Productions and Sri Lakshmi Venkateswara Cinemas banners.