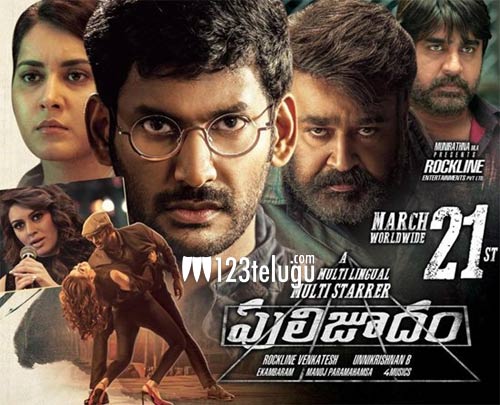 Released in 2017, Tamil star Vishal and Malayalam stalwart actor Mohanlal’s crime thriller, Villain, went on to become a decent hit. Directed by Unnikrishnan and produced by Lingaa and Power fame Rockline Venkatesh, the film also has Raashi Khanna, Hansika and Manju Warrier as the leading ladies. Tollywood hero Srikanth played a key role in the movie.

Villain is now dubbed in Telugu as Pulijudam and is releasing across the twin Telugu states tomorrow (Mar 21). As per the latest updates, Pulijudam will be 25 minutes shorter than its original version. Since there are no other notable releases tomorrow, Pulijudam has secured many screens in Andhra and Telangana. Whether the Telugu version will manage to repeat the success of its original remains to be seen.