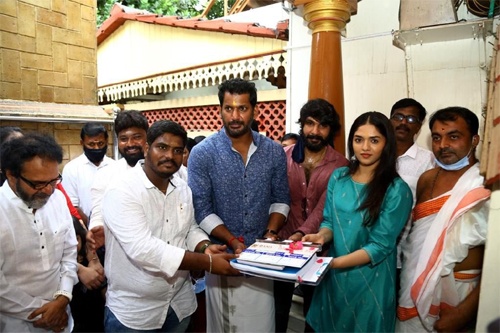 Noted Kollywood hero Vishal and talented young beauty Sunaina will be seen sharing screen space in an as-yet-untitled pan-India action entertainer. The muhurat ceremony took place earlier today at a Saibaba temple in Chennai on the occasion of Vishal’s birthday and even the regular shooting has been commenced.

Apparently, the film will have the same title for all the five languages including Telugu, Tamil, Malayalam, Kannada and Hindi. The makers have already locked the title and it means “an object that influences bringing big change in the society is the meaning of the title.

A Vinoth Kumar is directing the movie, while Ramana and Nandha are jointly producing the movie under Rana Productions.