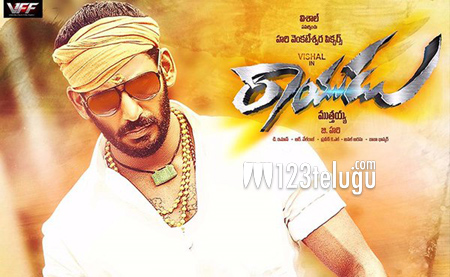 Vishal, the Telugu boy who made a decent name for himself in Tamil film industry, is all set to greet his Telugu fans this summer. The actor’s latest Tamil film Marudhu is being dubbed into Telugu as Rayudu and the film will release on May 20th. Rayudu’s first look was unveiled today.

Rayudu is a mass action entertainer and the film stars Telugu actress Sri Divya playing the female lead. The film is directed by Mutthaiah. Rayudu’s audio will be launched in the first week of May. Vishal’s last few films failed to score big in Telugu and he is hoping to strike a solid success this time around.