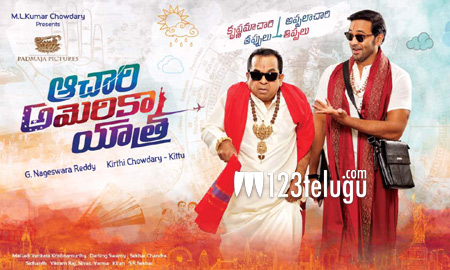 It is well-known that Manchu Vishnu is working on a project with comedy entertainers’ specialist G. Nageswara Reddy. Titled Achari America Yatra, the film also has star comedian Brahmanandam in a prominent role.

Touted as a hilarious comedy entertainer, the film’s shooting is progressing at a brisk pace. A latest update reveals​ that the first schedule, which began on the 5th of this month, is completed. Several key scenes featuring all the major cast were shot in a specially erected set. The unit will soon be flying to the USA for a major schedule.

Young starlet Pragya Jaiswal will be seen as the female lead in this film, which also has noted comedienne Vidyullekha Raman. Keerthi Chowdary and Kittu are producing the movie and senior producer ML Kumar Chowdary is presenting it.