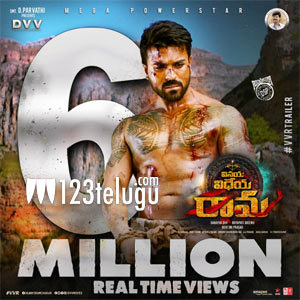 Vinaya Vidheya Rama is one film which the fans of Charan are looking forward to eagerly. Now, the latest we hear is that the trailer of the film has crossed 6 million views in no time.

The film is directed by Boyapati Sreenu and has Kiara Advani as the female lead. Slated to hit the screens on the 11th of January, this film has music by DSP.

Charan will be seen in a complete mass avatar for the very first time in his career.