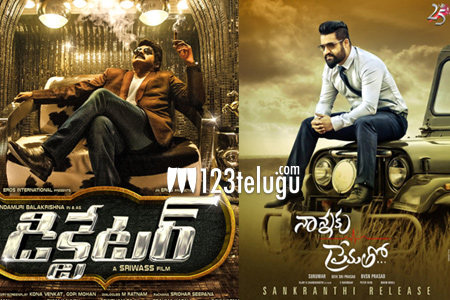 During his speech at the audio launch of Dictator, Balakrishna made it quite clear that his upcoming film Dictator will surely release during Sankranthi. This was nothing new as the makers were very clear about their film’s release dates.

Same is the case this Sankranthi as NTR too is also coming ahead with his action entertainer Nannaku Prematho and a big Nandamuri clash is on the cards. But certain reports reveal that either one of the films will move out of the picture to avoid split in openings and run.

Now discussions are rife that which movie will be postponed. Certain news agencies reveal that Dictator will release on the 7th where as Nannaku Prematho will hit the screens on the 8th. If these dates are confirmed, then it will be an epic clash between the Nandamuri family.

But this has not gone well with the industry insiders as they want both the films to release with a gap so that both can have equal space and good run at the box office. The coming days will be really interesting to see who will back out and will the big clash be averted at the box office.