Yet another crucial meeting between Talasani and Tollywood producers
Published on May 27, 2020 8:00 pm IST 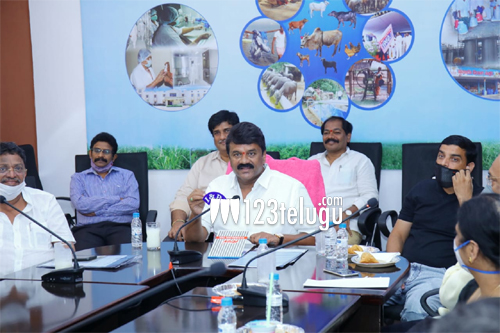 Around a week ago, several prominent Tollywood celebrities met Telangana state Cinematography Minister Talasani Srinivas Yadav and sought his permission to resume film shootings and reopen movie theaters. The team later met CM KCR, who assured that he will look into their concerns positively.

Today, a group of top producers met with Talasani yet again. The minister once again assured them that the government will be coming up with the best policy to bail out the Telugu film industry post lockdown. He reminded that necessary permissions have been given already to resume the post-production works and that even the resuming of shootings and reopening of theaters will be looked into seriously.

The producers will be meeting with the state Chief Secretary on the 28th of this month (tomorrow) at 3 pm to discuss the issues being faced by them. Dil Raju, former FDC Chairman Ram Mohan Rao, C Kalyan, N Shankar, MAA President Naresh, senior actress Jeevitha and others were part of the meeting with Talasani today.