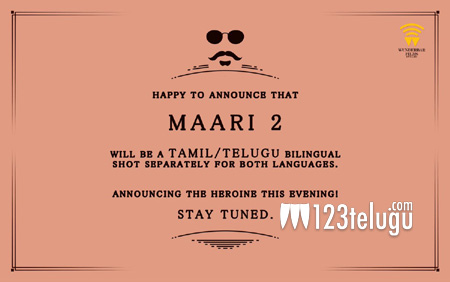 This is the season of bilinguals and we are seeing several stars from Telugu, Tamil and Malayalam movie industries venturing into other languages. And here’s yet another Tamil star who’s making his debut in Tollywood with a bilingual.

This morning, Dhanush’s production house, Wunderbar Films, announced that a sequel to the 2015 gangster comedy drama, Maari, will be launched soon. The makers further said that Maari 2 is going to be a true Tamil-Telugu bilingual.

Maari 2 will be directed by Balaji Mohan, who had earlier directed Siddharth’s Love Failure. Stay tuned for more updates on this exciting project.