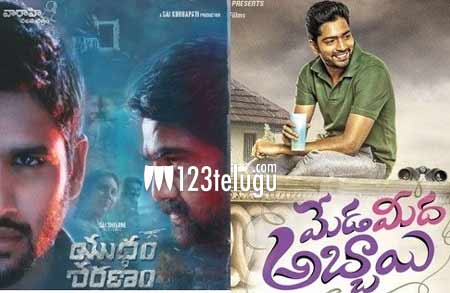 After scoring decent hits with his last two films – Premam and RRVC, Naga Chaitanya was on a hat-trick with his latest action thriller, Yuddham Sharanam. The film released to mixed reviews on Friday.

As per the latest trade updates from Krishna district, Yuddham Sharanam has collected a share of Rs.6,09,931 on day Saturday, taking its 2-day total to Rs.18,51,824 in the region.

On the other hand, comedy hero Allari Naresh has been eagerly waiting to score the much-needed hit with Meda Meeda Abbayi. The film, a remake of the Malayalam hit, Oru Vadakkan Selfie, released on Friday to lukewarm response. In Krishna district, MMA has collected Rs.4,86,951 share on Saturday and the film’s 2-day share totals to Rs.9,95,085.