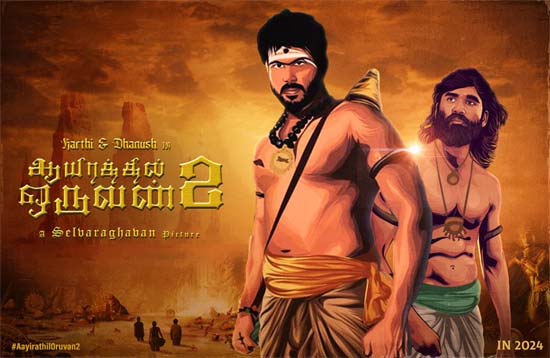 Karthi starrer Yuganiki Okkadu (AayirathilOruvan2 in Tamil) enjoys a cult following. The surprising thing is that the film was a bigger hit in Telugu than the original Tamil version. Master filmmaker Selvaraghavan directed this action-adventure thriller.

From the release of the film, there was much anticipation for the sequel. Recently the director announced part 2 of this project but shocked everyone by roping in Dhanush for the lead role. A few were disappointed as they wanted to see Karthi again in the sequel, despite Dhanush also being a terrific performer.

Today a fan-made poster of the sequel surfaced on Twitter, and it is setting social media on fire. Both Dhanush and Karthi were featured in this fan-made poster which looks terrific. Selvaraghavan is planning something big for the sequel, which releases in 2024.