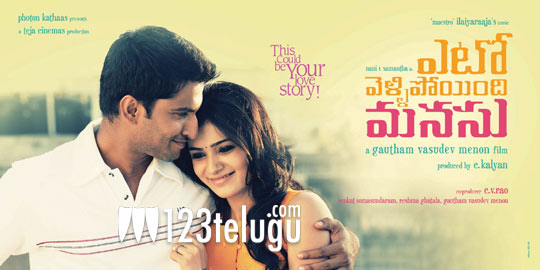 Gautham Menon’s latest film Yeto Vellipoyindhi Manasu, which is going to release on December 14, is set to take a good opening in major cities across Andhra Pradesh. Nani, Samantha have played the lead roles in this romantic entertainer. C Kalyan is producing the film. In a press meet earlier today, he revealed that the film is releasing in almost 500 theatres including 51 screens in US. It’s one of the biggest releases ever in Nani’s career and the actor is elated that the opening response for the film is quite good. In multiplexes across Hyderabad, there’s good demand for the tickets, thanks to the buzz surrounding the film. Meanwhile, Samantha flew to Chennai to join the crew and cast of the film’s Tamil version Neethane En Ponvasantham. The entire team had been promoting the film for the past couple of days in Chennai and Hyderabad. Ilayaraja has composed the music and MS Prabhu is the cinematographer.