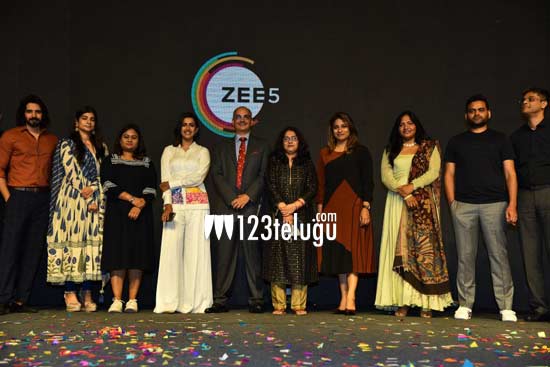 Zee 5 has revealed a power-packed line-up of 11 originals across a gamut of genres in the presence of industry stalwarts such as Harish Shankar, Praveen Sattaru, Kona Venkat, Niharika, and Sushmita Konidela.
The star-studded event –‘Hooked’, showcased the platform’s expansive line-up for Telugu audiences creating excitement with some highly anticipated original series, blockbuster movies, and the best of dubbed content.

One could also catch a glimpse of the highly anticipated upcoming titles such as ‘Recce and ‘Maa Neella Tank’ – a romantic comedy based in a small village that marks heartthrob Sushanth’s OTT debut.

The event also saw noted filmmaker Harish Shankar revealing the first look of ‘ATM’- a heist comedy featuring Subbaraju, Prudhvi, and VJ Sunny. The audiences were hooked to the line-up which boasts shows like Hello World! – based on the life and trials of a group of youngsters on the cusp of their careers in the prominent IT sector of Hyderabad and Mission Tashaffi -an adrenaline-pumping spy drama.

Other shows which we can look forward to are Paruvu, Bahishkarana, The Black Coat, Prema Vimanam, and Hunting of the Stars. In a bid to appeal to the sensibilities of every Telugu viewer, Zee5 has also acquired movies like Karthikeya-2 and Hanu-Man.