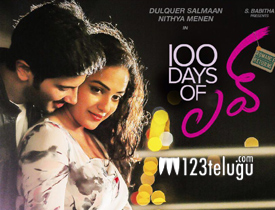 To cash in on the hit combination of Nithya Menen and Dulquer Salman, the makers of Malayalam film 100 Days of Love have dubbed their project in Telugu with the same title and have released it today. Let’s see how this film turns out to be.

The story of the film is about a writer called Rao Gopal Rao(Dulquer Salman) who spots the gorgeous Savitri(Nithya Menen) in a taxi and falls head over heels for her. He starts searching for her and after a lot of difficulties manages to find her.

Right, when the time he decides to confront her about his love, Gopal comes to know that Savitri is his old schoolmate whom he hated all his life. Rest of the story is as to how Gopal changes his mind and manages to win Savitri who is already engaged on the other hand.

The one and only selling point of the film is the lead pair. The entire film is set on these two stars and whatever sparks we see are thanks to their stunning performances. Dulquer Salman is lovable in his role and holds the film till the end. It is because of his screen presence that the film looks bearable.

Though Nithya has very less to do in the first half, she covers things well during the second part. The second half has some breezy and romantic moments which can go well with the youngsters. The last fifteen minutes of the film are a bit interesting.

Heroine’s character has not been clearly justified. The way she accepts for her wedding and changes her mind during the end, all these facets should have been shown convincingly.

The story of the film is ages old and has absolutely nothing new to offer. Things get so predictable after a point that you can easily understand what is going to happen next. Dulquer’s double role looks stupid and lacks any justification at all.

Production values are just average as the film looks quite dull. Music is bad and so is the background score. Dubbing is very good and so are Telugu dialogues written. Editing is horrible as many scenes during the first half could have been easily edited.

Coming to the director Januse Mohammad, he has done a very ordinary job. He has just taken the lead pair and played around their stardom. He had an interesting premise but wastes too much time establishing the story. Had he introduced the heroine a little earlier and made things breezy, things could have been a lot better.

100 Days of Love is a film which is dubbed into Telugu to just cash in on the huge craze of Nithya Menen and Dulquer. The lead pair’s chemistry is the biggest and only highlight of the film. But the lethargic first half and predictable nature of the script makes this movie an below average fare and can be watched only if you have absolutely nothing else to do.