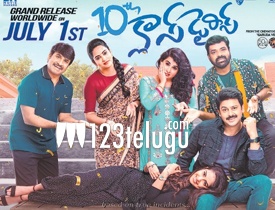 Srikanth and Avika Gor starrer 10th Class Diaries has hit the screens today. Let’s see how the movie is.

Somayaju (Srikanth) is a rich businessman in Miami, US. Despite having everything he feels dissatisfaction in life and finds it is the happiness he is missing. Then he returns to find his school love Chandini (Avika Gor) and plans a reunion with his 10th classmates. Everyone attends the meet except Chandini. What happened to her? Why didn’t she attend the reunion? What did her classmates do then? To know the answers you need to watch the main movie.

Movies with the concept of reunions are nothing new to our audiences. They have already seen several movies with the concept. But, what makes 10th Class Diaries different is the story about the female lead, Chandini played by Avika Gor. More than the reunion, the story revolves around her only. She performs well in the role and in the meantime, Srikanth also delivered his best.

The best part of the movie is the comedy. Srinivasa Reddy and Vennela Ramarao make the movie watchable with their decent comedy. Vennela Ramarao’s character is quite entertaining throughout the film. His actions and witty punches are enjoyable. Nassar plays a good role. Cinematography is fine and the background score elevates some scenes in the film.

Though the story is good, the director fails to narrate it in a good manner. The screenplay is not engaging, especially in the second half. There are many characters in the film but only a few will be remembered. The songs fail to carry the emotion in the respective scenes. Some emotional scenes turned out funny because of the characters’ poor performances.

Some scenes in the latter half are illogical. For instance, how does a person, who still lives with sad memories of first love suddenly change as ‘nothing’ has happened? Dialogues could have been more emotional.

‘‘Garudavega’ Anji excels as a cinematographer more than a director. The movie could have been better if the director concentrated more on the story and its narration. Background score by Chinna is good. Suresh Bobbili’s music is okay. Editing by Prawin Pudi is good but some scenes in the second half could have been trimmed. Coming to production values, the producers have spent decent money on the film to make it look good.

On the whole, 10th Class Diaries is an okayish movie that works only in parts. Comedy by Vennela Ramarao and a few emotional scenes are fine to watch. Performances from the lead pair are nice. Barring a few scenes, the film is watchable. Go for it if you find no film interesting this weekend.