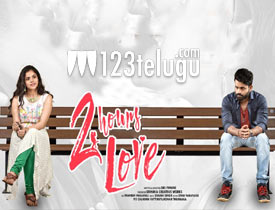 Continuing the trend of low budget films, yet another movie titled 2 Hours Love has hit the screens today. Let’s see how it is.

Adith(Sri Pawar) instantly falls in love with Avika(Kriti Garg) and even proposes to her. But to his shock, Avika lays a condition to him that she will only love him for two hours straight. Adith accepts this condition and starts spending time with Avika. Once again, Avika lays one more condition to Adith that she wants a break for two months in her relationship. Even for this, Adith agrees and as time passes by, he comes to know that Avika is originally known by the name Nayana. Why did Avika change her name? What is this whole concept of 2 Hours Love? To know this, you have to watch the film on the big screen.

Hero Sri Pawar did his role sincerely and stood as the highlight of the film. His performance is quite realistic in many scenes and the young actor showcased his emotions well in the crunch climax scenes. The concept of 2 Hours Love looks interesting on paper.

Heroine Kriti Garg looks cute and also did her key author-backed role well. Her chemistry with Sri Pawar looks good on screen. Srinivasa Raju, the guy who played the negative role was really impressive in his character. His comic timing in the film is good. Some of the love scenes showcased look a bit novel on screen. He has designed the love track well.

The director starts the film well but after a point loses grip on the proceedings and brings in some silly scenes which sidetrack the film. A number of scenes in the film look repetitive and could have been chopped off by the makers to make things interesting. Because of all this, the basic flow in the film completely goes missing.

The second half is the actual culprit where the film goes down drastically. Even though the concept looks good, the execution part is not that convincing at all. There was a lot of scope to elevate the content but the director failed to do so. The basic conflict point is also not addressed well.

Editing is just about okay as the film could have been trimmed a bit more in the second half. Camerawork by Praveen is decent as he has showcased the love track in an engaging manner. Production values of the film are also impressive. Music by Gyani Singh is impressive as the songs have been composed well. His background score for the love track is very good. Coming to the director Sri Pawar, his concept is good but the way he executed the film in a dull manner shows his inexperience.

On the whole, 2 Hours Love has a decent concept which is not at all executed properly. Even though there was a good scope for good proceedings the director failed to utilize it. However, Sri Pawar’s acting is impressive and he gives a good performance. But that is not enough for the film to click as it has an uneven narration and way too many scenes which sidetrack the film and make it a below-par watch this weekend.