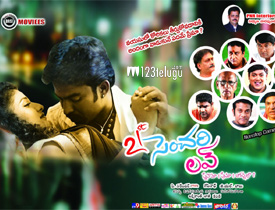 Continuing with the flow of low budget films, yet another youthful entertainer which has hit the screens today is 21st century love. Let’s see how this film turns out to be.

Balu(Gopinath) is a simple teenager who has immense respect for his father and does everything with his consent. One fine day, he falls in love with his intermediate class mate Priya( Vishnu Priya) and starts spending some good time with her.

As expected, he reveals his feelings to his father who in turn asks Balu not to rush things and find out clearly whether it is just a fatal attraction or true love.

Taking his father’s advice, Balu confronts Priya and puts forth an interesting condition to test their love. What is that condition ? Will Priya agree to all this ? and what happens during the course of time. That forms the rest of the story.

The message that the makers have put across with this film is okay. They have written an interesting line as to how younger generation feel about love and spoil their lives in doing things in a hurry.

Heroine Vishnu Priya shines in her role and does a very good job with her character. Some of the comedy episodes featuring Jabardasth Venu and others work in bits and pieces. Certain scenes in which the couple find out their true love have been executed well.

One of the biggest minus points of the film is the routine and predictable story line. Even though the message delivered is good, the way it has been executed is pretty ordinary. You exactly know what is going to happen next as nothing much interesting is showcased though the proceedings.

Some of the supporting cast looks silly and performs very badly. Chemistry between the lead pair is completely missing in the film. Yet another problem of this film is the lack lustre narration.

Not once during the film, things excite you any where. Songs also create a huge disturbance and irritate the audience big time.

Music by Kanishk is below average. Camerawork is okay and so is the editing. Production values are decent. Coming to the director Gopinath, who also does the lead role, is quite disappointing. Perhaps, his idea of delivering a decent message is right but the path chosen by him lacks depth. Looks like he got confused in handling too many departments and made things go out of hand.

Whenever you try to give a message through a youthful love story, things should so be interesting that one should not feel that he is being tortured with unnecessary scenes and drama. Same happens with 21st century too, as the proceedings gets so predictable and mundane after a point that one finds reasons to walk out of this film at once.