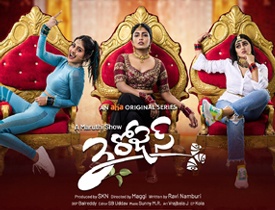 Featuring Eesha Rebba, Payal Rajput, and Poorna in the lead roles, 3 Roses is the latest outing from Aha Video. The series premiered on the platform today and here’s our review of the same.

The series centres around three individuals, played by Eesha Rebba, Payal Rajput, and Poorna. What are the typical challenges these three individuals face at the home and at their work place? What are their takes on Marriages, and relationships? How are they connect? The answers to these questions form the remaining plot.

The series is powered by fine performances from the lead cast. Eesha Rebba is particularly good and she plays her character with great ease. Payal Rajput has limited screen time. Poorna bags a good role and she portrays it well. Viva Harsha provides comical relief here and there.

Noted Telugu director Maruthi penned the story for the series and he has left his mark in a few comical sequences through the course of the series. A few situational comedy scenes will leave the viewers in splits. The entire story is presented from the female leads’ point of view and this gives the series kind of a fresh touch.

Despite having a relatively fresh premise, the series progresses along on a predictable note. The narration is formulaic and the viewers can easily guess what is about to happen next.

The complications that are associated with the lives of women form the crux of the series but they are presented in a routine manner. The same old parents pressurising their daughters to get married track is used extensively.

The series is directed by a debutante named Maggi. The narration has nothing new to offer, but with situational comedy here and there, the tempo goes up occasionally. The background score is adequate. The sole song in the album is good. The cinematography is decent and so are Aha Video’s production values.

3 Roses is a middling sit-com series that revolves around the lives of three women. There is nothing new in terms of story or the set-up but a few slapstick comedy scenes keep the momentum going. If watched with minimal expectations, the series might make for a one-time watch. The first four episodes are available for streaming now. The next four episodes which are also included in the first season will be premiering on the 19th of this month.