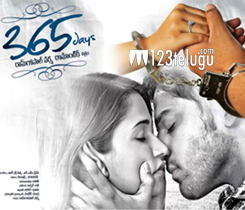 If there ​is one thing that you cannot stop Varma from doing, it is making movies. The maverick director is back with a film titled 365 Days which is based on today’s fast paced relationships. Let’s see whether the film manages to impress or ends up as yet another dud from RGV.

Apoorva(Nandu) is a young corporate employee who falls in love with Shreya(Anaika Soti). The couple get closer to each other and soon their love leads to their happy wedding. After a few days of their blissful marriage, the couple get into a huge fight and misunderstandings start creeping up in their relationship.
Things get so ugly that they stop believing in the concept of marriage any more. Rest of the story showcases as to what actually lead to those problems and how do they end up solving them.

One of the biggest selling point of the film is the concept chosen by RGV. The audience will be keenly interested to know as to how RGV, who is always associated with hard hitting films, has dealt with a family entertainer.
One of the major highlights of the film is Posani Krishna Murali. He entertains us quite decently with his cameo and brings a lot of relief to the film. Nandu has done a honest job with his performance. The way he has portrayed varied emotions in his character is quite endearing to watch.

Anaika Soti oozes glamour and provides eye candy for the film. First half of the some film is crisp and has some elements which will be liked by today’s youngsters.

Story of the film is quite simple and has nothing much to offer. One of the biggest drawbacks of the film is the narration. RGV’s execution lacks clarity and has no depth in the emotions. The pain and grief which is caused by these misunderstandings have not been showcased properly.

Second half of the film is the biggest drawback and has no weight in the proceedings. The film is dragged to the core and gets boring after a point. Neither the narration nor the scenes manage to entertain the audience. Even though Varma tries hard to salvage things, the film starts going downward slide. After a point, Varma only tries to showcase the problems between the married couples which goes a bit overboard.Emotional bonding between the couple has not been showcased at all. Songs are a huge hindrance and disturb the flow of the film big time.

Camera work is pretty decent but gets irritating whenever the slow motion shots come in. Even though the music is decent, too many songs spoil the flow of the film. Background score is pretty good and so is the art work in the film. Editing is below par as many scenes in the second half could have been easily edited.
Coming to the director RGV, he has chosen quite an interesting subject but has dragged it to the core. Even though he starts on a positive note, he falters half way through as none of his scenes make an impact.

On the whole, 365 Days is yet another disappointment from RGV. Even though he chooses a contemporary concept of today’s fast paced relationships, he completely falters in his execution. Posani’s character, Anaika Soti’s glamorous looks and Nandu’s performance are the only saving graces for this flick. But a dragged out second half and lack of emotional depth go against the film completely.