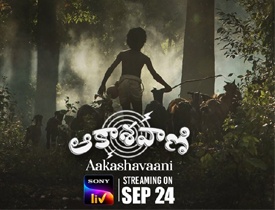 Aakashavaani is a film that has been promoted a lot in the last few days. The film is streaming now on Sony Live and let’s see how it is.

The film is based in a remote forest where the tribals live on their own and have no knowledge about the outer world. They are controlled by a man called Dora (Vinay Varma) who uses these tribals for his own good. Things change when a kid from the tribals finds a radio. Upon this, a schoolmaster(Samuthiraikani) enters the forest. What changes did the tribals see in their troubled lives after the schoolmaster’s entry forms the story?

Ashwin Gangaraju has directed this film and his taking is good. The backdrop he has chosen and the way he set up the story in such a unique setup looks good. The innocence of the tribals has also been captured well. Samutiraikani is good as always and elevates the film with his performance.

The emotions in key scenes are pretty good. Also, the social message showcased in the film is impressive. Also, the character graphs look quite realistic in the film. Vinay Varma as the Dora was quite impressive.

One of the biggest drawbacks of the film is its slow pace. The director takes a lot of time to enter into the actual story. As too much time is taken to introduce characters, the pace drops, and things get slow in the first half.

Apart from the key characters, the rest of the cast is new and this is where things get dull as the emotional connection goes missing in a few scenes. The film is a serious subject and is devoid of any commercial aspects, so don’t expect something special going in.

Music by Kala Bhairava was impressive and so was the BGM of the film. The camera department also does well in showcasing realistic visuals. The editing could have been better in the first half. Coming to the director Ashwin, his style of taking is impressive. But his narration is slow and dull in the first half. If he would have worked on this, the film would have been even more engaging.

On the whole, Aakashavaani is a forest drama that has a very interesting backdrop with good visuals. But the slow first half and dull star cast cannot manage to hold the fort and make this film a below-average watch this weekend.