Review : Abhinetri – More of a Comedy than horror 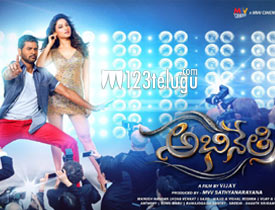 The much promoted “Abhinetri” finally hit the screens today after intensive promotional activities by Sonu Sood, Tamannah & Prabhu Deva. This is a trilingual film which is releasing as Tutak Tutak Tutiya in Hindi, Abhinetri in Telugu and as Devi in Tamil. The promotions definitely raised expectations about the film which was being spoken as a horror-comedy and so let’s read on to know what this ‘Abhinetri’ has in store for us.

‘Abhinetri’ has a simple enough storyline that starts off with a flashback showing Krishna (Prabhu) working with a Mumbai corporate. His ambition is to marry an English speaking westernized girl as he feels that it would give him a higher social standing given his village background.

Ironically, he gets married to Devi (Tamannah) while on a visit to his village due to family pressures. He makes all attempts to hide his marriage when he returns to Mumbai with Devi and this includes moving into an old apartment and trying to convince Devi to go back to the village. Things change hugely once Krishna and Devi settle into the apartment with Devi behaving like a different person altogether.

Soon enough, she attracts the attention of Raj (Sonu Sood), a huge film star, who signs her up for his next film. In parallel, Krishna figures out that Ruby, the previous occupant of the apartment had committed suicide and has now possessed Devi.

What will happen to Devi and her film ? Will Raj realize that Devi is possessed ? The answers to these questions are what the rest of Abhinetri is all about.

What works for ‘Abhinetri is that the director keeps the narrative fairly simple. He does not go overboard with the horror scenes which thankfully do not have the usual gory sound effects or visuals.

Balancing comedy and horror is not easy and this balance is achieved by a certain amount of success in Abhinetri. It’s good to see Prabhu Deva back on screen as the helpless husband who keeps negotiating with a stubborn ghost who has possessed his wife while trying to keep Sonu from falling in love with her. His dances are exemplary as usual and he shines in the ‘Chill Maar’ song.

Apart from him, Tamannah does full justice to her role. Saptagiri plays out his comic act well as Prabhu’s friend and he gets the maximum laughs from the audience.

For a film that was promoted as a horror-comedy, the film doesn’t do complete justice to either genre as we don’t get to experience too many laughs or chills.

The comedy is very situational and once the reveal about Ruby comes in at the end of the first half, the horror angle disappears. This makes the narrative quite predictable. Same is the case with Farah Khan’s cameo that lacks bite post the dubbing.

Production values of the film are pretty good and showcase the film in a rich light. As expected for a film starring Prabhu Deva, the choreography is well done. Prabhu rocks it in the Chill Maar song which has guest appearances by Amy Jackson & Raju Sundaram. They have also managed to make a non-dancer like Sonu Sood also look good in the songs.

The cinematography effectively captures the mood of the film. Given that the movie was shot in 3 languages, there are some misses in the editing department with some of the reaction shots not coming in sync.

Abhinetri is a very simple tale that keeps you occupied (if not entertained) for its two hours duration. if you ignore the few gltiches here and there, it is a movie that can be watched once.