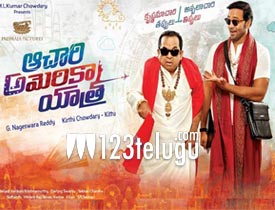 Vishnu Manchu’s Achari America Yatra has been waiting for its release for quite some time now. The film starring Vishnu Manchu and Brahmanandam in lead roles has finally hit the screens today. Let’s see how it is.

Achari(Vishnu) and his group of pundits get into a tussle during one of their puja ceremony involving Pradeep Rawat and his gang. Scared that the bad guys will kill them, Achari and his team escapes to America silently. After a while, things are revealed in such a way it was Achari who willingly brought everyone to America with a plan. What is that plan? Who is in America? and where does Pragya Jaiswal feature in this entire set up? That forms the rest of the story.

One of the basic assets of the film is Vishnu Manchu and Brahmanandam’s chemistry. Whenever they appear on screen, things look quite good and happy. Vishnu evokes good comedy in his role and does well in crucial scenes where he showcases his heroism.

It is good to see Brahmi in a full-length role after a very long time. He is good in his comedy and does what is expected of him. Pragya Jaiswal looks cute and has a decent role in the film. As always, she looks good in Indian attire and ably supports Vishnu.

Brahmanadam’s love track with Surekha Vani evokes few laughs here and there. Kota Srinivasa Rao is seen in a good role and his presence adds a lot of depth to the film in the first half.

The story of the film is ages old and has nothing much to offer. The villain gang, boring episodes in the second half deviate the interest of the audience constantly.

30 years Prudhvi’s track is outright irritating and causes a headache for the audience. A powerful villain like Thakur Anoop Singh is made to look quite silly in the second half with his weak characterization.

Thaman’s music is pretty decent as some of the songs sound well. Dialogues written are witty and evoke some laughs here and there. The screenplay of the film is quite disappointing as the funny episodes and the manner in which the hero goes about saving the heroine looks over the top. Editing is below average as at least two songs could have been edited out easily. Production values are disappointing as America and its surroundings are not showcased well.

Coming to the director Nageswara Reddy, he generally dishes out good comedy in his films but things have gone haywire in this movie. The comedy works only in parts but his narration in other aspects of the film fails completely.

On the whole, Achari America Yatra is yet another outdated comedy which has nothing new to offer. The same old plot, weak narration in the second half and lack of basic emotions slow down the flow of the film completely. All those who love Manchu Vishnu and Brahmanandam’s chemistry can give this film a shot. But the rest can keep their options open this weekend.