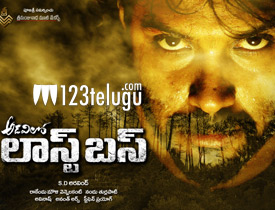 Last Bus, which was a decent hit in Kannada has now been dubbed with the title Adavi Lo Last Bus. This thriller has hit the screens today and let’s see how it is.

A group of friends head for trekking to a famous mountain area near Aruku valley. Suddenly, one of the members in the team, Pruthvi gets lost in the chaos and finds himself in no man’s land. After a lot of struggle, he reaches a small village and takes a bus back to the city.

Within no time, the bus gets into an accident and the driver goes missing. Everyone in the bus starts searching for the driver and ends up in a mysterious location in the jungle. Rest of the story is as to how Pruthvi saves himself from this crazy situation and gets out safe.

One of the biggest plus of the film are the superb locations. The places chosen and the way they have been utilized by the makers for making a thriller is quite good. Avinash Narasimha Raju who did the main lead is quite impressive in the film. All his expressions during the tense moments are good.

Story of the film is also decent and has been set amidst the forest set up well. Interval bang of the film is exciting and the twist that is revealed is also interesting.

The biggest drawback of the film is the execution part. Even though the story line is good, the way the proceedings have been executed post the first half is below average. The film changes track every time, and a whole new angle is showcased which gets confusing.

The various sub plots have not been interlinked well and the screenplay lacks depth. The horror factor and the way the evil spirit goes about doing things in the film is hardly explained.

There was a lot of scope for comedy in the film but the makers have not utilized it one bit. Pace of the film is also slow in many areas. The basic emotion of thrill is completely missing in the film.

Camera work in the film is very good and especially the aerial shots composed are tremendous. Two songs that come in have been written and executed nicely. Special mention should go to the art direction team for showcasing the sets in a stunning manner. Editing is so bad that major links go missing for Telugu version. The dubbing done also adds to the pain.

Coming to the director Aravind, he chooses an interesting story line but fails in his execution. Care should have been taken for the dubbed version as the film is edited out in many areas and lacks proper flow.

On the whole, Adavi Lo Last Bus has an interesting premise which is let down by some sloppy execution and horrible editing. Except for some thrilling elements during the first half, this film lacks clarity in many areas and can be easily overlooked this weekend.