Review : Agent Bhairava – Only for masses 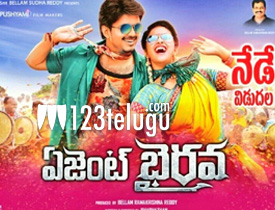 Tamil superstar Vijay, who is continuously dubbing his films in Telugu has come up with yet another action entertainer Agent Bairavaa. The film has hit the screens today. Let’s see how it is.

Bhairava (Vijay)is a loan recovery agent who falls for Madhavi Latha (Keerthy Suresh) at a wedding event. In this process, Bairava finds out that Madhavi is facing a huge problem from a dreaded goon called PK(Jagapathi Babu).

What is that problem? Why did PK enter Madhavi’s life? and how does Bairava help her? To know these answers, you have to watch the film on the silver screen.

Undoubtedly, Vijay is the major plus for the film. His mass appeal and mannerisms are a feast for his fans. His typical dance movements and a few elevation scenes are good. Keerthy Suresh impresses with her cute looks and her character has a reason and purpose in the film. She has excelled in her role as a medico.

JB is too good in his role as PK. His get up and character is well designed. Comedian Sathish did an okayish job as hero’s friend. The interval block and a heavy duty fight which comes during that time are good. The confrontation scenes between Vijay and JB have come out quite well. A social message given at the end was good.

Debutante director, Barathan’s idea of making a full-fledged commercial film with a good social message is good but he diluted the proceedings with a flat narration most of the time.

Generally, Vijay’s fans and mass audiences expect some elevation scenes featuring the hero but the director has completely put them aside in this film. The runtime of the film is a major drawback as it is too long.

A family song which comes in the pre-climax literally tests the audience’s patience to no extent. After a point in time, the film gets highly predictable and noisy.

As said above, director’s flat narration kills the movie to an extent. Even though he had a good scope, he lets go of the opportunity. Editing by Praveen KL is not up to the mark as many unwanted scenes could have been removed easily. Cinematography by M.Sukumar is good as captures locations in the songs quite well.

Music by Santhosh Narayan is disappointing. Apart from the background score, his music is not at all an advantage for the film. Production values are good for this high budget entertainer.

On the whole, Agent Bairava is a routine commercial entertainer with a good social message. Though the film has some elevation scenes, rest of the film disappoints because of the flat narration. Those who love to watch formulaic commercial films can give this film a try and the rest can take it easy.