Review : Akshara – Strictly for second half 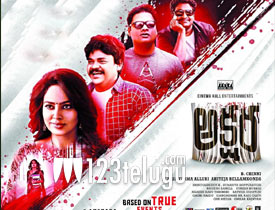 Nandita Swetha’s Akshara is carrying a decent buzz among the film circles. Being directed by Chinni Krishna, the film has hit the screens today. Let’s see how it is.

Akshara(Nandita Swetha) joins as a teacher in a reputed educational institution called Vidya Vidan college. As time passes by, friendship blooms between Akshara and her colleague Sri Teja(Sri Teja). One fine day, Teja decides to propose to Akshara, but as a major twist, she kills him all of a sudden. Why did Akshara kill Sri Teja? What is the main motive behind Akshara joining as a teacher? To know that, you have to watch the film in the theatres.

Nandita Swetha’s performance in the given purposeful role is good as she emoted in a convincing manner. Her acting during a crucial press meet episode in the second half draws applause from the audience.

The core point of how the corporate education system is affecting the children and pressurizing them to get top ranks has been projected in a very emotional backdrop. Actors like Sanjay Swaroop, Sri Teja, Satru along a few noted artists portrayed their given roles in a decent manner.

The interval twist following by some emotional episodes in the second half is executed neatly without any deviation. Actor Harsha Vardhan gets a meaty role which is crucial and a major backbone for the film and he does supremely well.

Expect for the interval twist, the entire first half has nothing much to discuss and was mostly wasted with some forced comedy and unwanted scenes in the colony backdrop.

Though actors like Satya, Shakalaka Shankar, Madhu, and Ajay Gosh gave a decent performance, due to the lack of depth in their roles, the scenes involving them fail to impress the audience.

A few scenes like killing a police commissioner in a public jogging area look over the top and dilutes the authenticity in the narration.

Music by Suresh Bobbili is good as his background score and sound mixing in the second half bring depth to the proceedings. The cinematography work for the film is decent. Editing is decent as the film’s runtime is locked as two hours fifteen minutes. Production values for this limited-budget film are pretty good. Costumes designed by Gauri Naidu are quite impressive and look classy

Coming to the direction part, director Chinni Krishna should be lauded for taking up a burning issue as the main concept of the film. Though his screenplay and narration part has a few loopholes, the director succeeded in executing the key point in a convincing manner in the second half.

On the whole, Akshara is a social drama that deals with the flaws in the contemporary corporate educational system. If you ignore the dull and over-the-top first half, the proceedings in the latter half elevate the soul of the film in an emotional manner making it just an okay watch during this weekend.