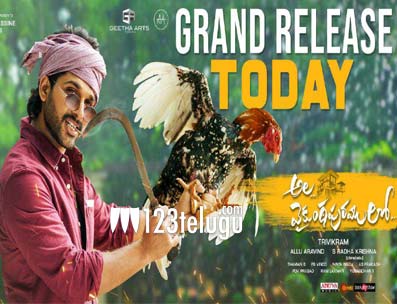 The second big release of this Sankranthi season is Allu Arjun’s Ala Vaikunthapuramlo. It has hit the screen today and let’s see whether Bunny makes a comeback or not.

Valmiki(Murali Sharma) is a small-time employee in a big company. During his son’s (Sushanth) birth, his boss’s wife (Tabu) also gives birth to a baby boy (Allu Arjun). But upset with his financial status, Valmiki cleverly interchanges the babies and brings the boss’s kid to his house and raises him. As time passes by, a tragic turn around of events happen and the truth is out in the open finally. The rest of the story is as to how Allu Arjun known as Bantu sets things right.

The story idea is very good and Trivikram has given his own spin to the film with solid dialogues and breezy narration. From start to end, Ala Vaikunthapuramlo has non stop entertainment which will please everyone completely.

Allu Arjun is in his elements and proves that a star like him cannot be pinned back for long. Bunny’s all-round performance is the biggest highlight of the film. His dances, comic timing, and performance will be a treat for everyone. Bunny has grown as an actor as all his scenes with Murali Sharma have been designed quite well.

Speaking of Murali Sharma, he is the backbone of the film and delivers his best performance to date. He as a desperate and cunning father is terrific and gives a whole new angle to the film. Tabu makes a good comeback and was good along with Malayalam actor Jayram in crucial scenes.

Pooja Hegde is beautiful as her role and chemistry with Bunny is so cute. They make an adorable couple. Sachin Khedekar gets a crucial role and is quite good in the emotional scenes. Sunil is just about okay and so were Nivetha Pethuraj, Navdeep, Rahul Rama Krishna and Harshvardhan.

Lastly, Sushanth gets a good role. He is quite subdued in the beginning but performs well in the last part of the film. Last but not least, Thaman is the unsung hero as his music takes the film to another level altogether.

The villain’s track is a bit weak as a talented actor like Samutrakani has not been used well actually. The so called hero-villain moments are just about okay and do not create much impact.

The emotional content in certain areas could have been even stronger. Tabu’s role is dull for the most part as some solid family emotions between her and the other family members at the end would have made matters better.

Production values are top-notch as every frame looks superb. The camera work by PS Vinod is just amazing as he gives the film a classy look. Lyrics are very good and so was the production design. Bunny has been styled superbly as he looks uber cool in all the songs.

Editing is perfect and so was the dubbing done. Samutrakani’s voice and the way all the lead actors like Tabu and Pooja Hegde dubbed for themselves looks authentic on screen. The sets laid and the backdrop of the film is very good. Choreography in all the songs is dam good especially the Butta Bomma and Ramulo song.

Coming to the director Trivikram, he once again proves why he is the master of entertainment. The way he has written the story, dialogues and narrated the film with good entertainment and emotions speaks volumes of his work and gives an entertaining ride for the audience. He has showcased Bunny in a new avatar and made him the highlight of the film which his fans and general audience will just love.

On the whole, Ala Vaikunthapuramlo is a full-on solid family entertainer that ticks all the boxes right. Be it the story, dialogues, fights, romance and music, this film has it all and will be loved by the audience this Sankranthi. Allu Arjun makes a stylish comeback and is a treat to watch on screen with his all-round performance. The film will make good money this season and break many records in Bunny’s career. Barring the slightly dull and predictable ending, this film is a sure shot blockbuster this new year.