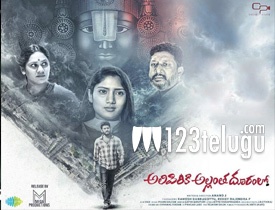 This week some low budget films have been released and one among them is Alipiriki Allantha-Dooramlo. The film is a robbery drama and let’s see how it is.

Varadhi(Raavan Nitturu) is a small-time vendor in the temple town of Tirumala. His only goal is to settle down in life and marry Keerthi (Sree Nikita). But his family is quite poor. In a tragic turnaround of events, Varadhi gets embroiled in a robbery of two crores and his life changes upside down. The rest of the story is about how Varadhi solves his issues and comes out of the mess.

Raavan Nitturu who plays the main lead is the major highlight and has done a good job in his role. He was quite good in all the emotional scenes in the film. The characters and emotions they go through due to the issues faced in robbery has been shown well. The key robbery scene has been executed quite well.

The main female lead, Sree Nikita, was also impressive in her role. The director Anand handled a few emotional scenes in a decent manner. The climax content has been brought in well by the director.

The drama in the film was missing in key areas. Though the director had a lot of scope to elevate the pain in the proceedings, he did not do it. He dragged the key scenes for no reason and left the conflict point aside.

The hero’s character graph is also not that great and more clarity would have made matters quite better. His narration is jaded and lacks the needed punch. The film starts on a good note but later fails to engage the audience in key scenes. There are so many repeated scenes which were not needed at all.

Music of the film was decent and so was the camerawork. The locations chosen and the way they were showcased was nice to see on screen. BGM was okay but the editing was not up to the mark. Coming to the director Anand, he has done a dull job with the film. He did not elevate the key conflict and narrated only a few emotions well.

On the whole, Alipiriki Allantha Dooramlo is a dull robbery drama which has nothing interesting to showcase. A few emotions and lead pair’s performance are good, but the rest of the film is slow and has repeated scenes making it a dull watch this weekend.