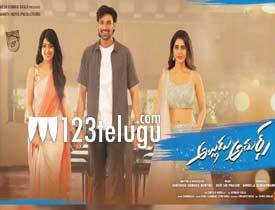 Seenu (Bellamkonda Sai) is a happy-go-lucky youngster from Hyderabad. He crosses paths with a dreaded Nizamabad village head named Jayapal Reddy (Prakash Raj), who hates the very idea of love after the death of his elder daughter Vasundhara (Anu Emmanuel).

What happens after Seenu falls in love at first sight with Jayapal Reddy’s younger daughter Koumudi (Nabha Natesh) and how he wins his love by overcoming the threat from Gaja (Sonu Sood) who served 20 years in prison, and the love stories featuring Seenu, Vasundhara and Gaja form the main crux of the story.

Entertainment laced with a few minor twists, especially in the second half, is the main highlight of Alludu Adhurs. The film is shot on a lavish scale and the production values can be seen on the big screen. A couple of songs, Alludu Adhurs and Bigg Boss beauty Monal Gajjar’s sizzling special song ‘Rambha Oorvasi Menaka’, will enthrall the masses.

Heroine Nabha Natesh doesn’t get a meaty role to showcase her acting skills. Anu Emmanuel too doesn’t have much scope for performance. Alludu Adhurs has a wafer thin storyline. The first half is passable and there’s nothing much to rave about in this part of the story.

The film gains some momentum only in the second half. Both the antagonists, Prakash Raj and Sonu Sood, were shown in a dreaded and menacing manner initially, but they both start doing comedy right after their respective introductions. This appears unconvincing and doesn’t add seriousness to the proceedings.

Director Santhosh Srinivas, who has an average story on paper, smartly relies on ‘confusion comedy’ featuring Sai, Sonu Sood, Prakash Raj and a bunch of comedians to keep the audiences engaged. The way he sets up the second half, the screenplay and even the characterisations of the lead actors remind us of Santhosh Srinivas’ previous blockbuster ‘Kandireega’.

Barring a couple of peppy numbers, music composer Devi Sri Prasad couldn’t come up with a memorable audio album. Even his background score, though does its job as per the story’s demand, doesn’t feature his trademark energy.

Alludu Adhurs is a half-baked mass comedy entertainer which only works to an extent, thanks to the confusion comedy generated through the lead actors’ hallucinations. On the whole, the film may find some patronage among the mass entertainment lovers this Sankranthi season. You may give this film a watch if you don’t worry much about its story, and entertainment is the only factor that interests you.