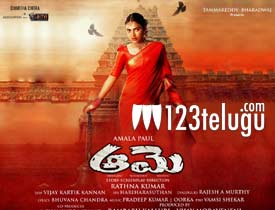 Amala Paul created a sensation of sorts with her bold act in the teasers of Aame. The film has finally hit the screens today after a bit of a financial tussle. Let’s see how the film turns out to be.

Kamini(Amala Paul) works in a private TV channel and does a program on prank videos. Her office gets shifted and to celebrate the old memories, Kamini and her gang decide to stay back in the old premises and party hard. But in a shocking turn around of events, Amala is left alone in the building and that too naked. Why is she naked? Who is behind this ghastly act? How will she come out of this tricky situation? To know the answers, you need to watch the film on the big screen.

The concept of the film is quite novel and is a brave attempt, to say the least. Amala Paul needs to credited for her gut, daring attitude in even accepting this film. She is almost naked in the entire second half and to pull off a performance in such a situation is just mind-blowing. The way she showcases her desperateness to come out of the situation through her expressions and body language is just top class and award-winning.

The interval bang is elevated quite well and sets the tempo of the film supremely well. The entire second half is quite gripping with suspense-filled scenes which are quite thrilling. The manner in which small aesthetics are used to showcase Amala’s struggle to get out of the building in a naked avatar has been executed well. Anchor turned actor VJ Ramya is very in her small role.

The emotional angle in the film has been conveyed in a superb manner. How in the name of feminism, things are getting overboard have been showcased nicely. The last ten minutes of the film has a superb social message which is connected nicely to the story. The film ends on an emotional and thought-provoking note.

One of the biggest drawbacks of the film is the first half and the length. The director uses way too much time to come to the main plot which is shown only at the interval point. There was no need to establish Amala’s character fo such a long time with many unnecessary scenes.

Being a thriller, the runtime should have been short and if the first half could have been trimmed, things would have been even more gripping for the makers. As the rest of the star cast is Tamil, the connectivity factor will be a bit less.

The film has amazing camerawork as Vijay Karthik has showcased the visuals in such a way that Amala Paul’s naked avatar is never disturbing or inconvenient to watch on screen. The background score by Pradeep is just okay and could have been even better. The Telugu dubbing is perfect and so was the whole production design. The makers have made sure that the logic does not go for a toss and have made sure that the set work and narration is neat. Editing is horrible for the first half but at the same time is superbly crisp and neat in the second

Coming to the director Ratna Kumar, one needs to praise his brave attempt which is really different. The manner in which he showcases the second half with just one character is superb. Also, the way he has brought the emotional angle and gave justification to the story is really impressive. But to do all this, he tests the patience f the audience in the first half.

One the whole, Aame is really a brave attempt in south cinema as a concept like this has never been tried before. Amala Paul single-handedly carries the film on her shoulders with her superlative performance. Commercially, the film might have a limited appeal but it has decent thrills, emotions, and suspense-filled scenes. But to enjoy all this, you have to sit through the lethargic and boring first half. Once you manage to do this, this emotional thriller will not disappoint you for sure.