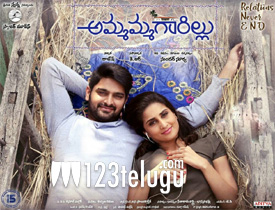 Naga Shourya’s latest family drama, Amammagarillu has finally hit the big screens today. The movie is riding on decent expectations, thanks to promising teasers and trailers. Let us check whether the movie matches the expectations laid on it.

A serious feud between Ravi Babu(Rao Ramesh) and his brother-in-law(Suman) keeps both the families away for 20 long years. Meanwhile, Suman’s son, Santhosh (Naga Shourya)develops a liking towards his Amamma, Seetha Maha Lakshmi (Sumithra) and waits for the right occasion to visit her house.

During the same time, Seetha Maha Lakshmi decides to distribute the property and invites the entire family along with Santosh to her village. However, things change drastically after everyone arrives at the village. All the people in the family become close to each other and end things on a happy note. Well, how did all this happen? What role did Santosh play to get the family together? Watch the film on the big screen to find out the answers.

Naga Shourya is a major plus for the movie as he carries out his role with ease. He comes up with a matured performance and tries to keeps things simple. His comedy timing is on point and a few scenes featuring him and Shakalaka Shankar will tickle your funny bones.

Shamili looks decent despite the fact that she stayed away from the cameras for a while. She does well in a tomboy role and her energy levels are good. Posani gets a small yet crispy role and he adds a humorous touch to the proceedings.

Rao Ramesh brings a lot of depth and intensity to the emotional track. His performance as a frustrated son and a rude contractor stands as the highlight of the film.

The first half of the movie runs at a decent pace, but things go wayward in the second half. Badly written emotional sequences can get on to the nerves as there is very little emotional connectivity that is carried through.

The one-liner dialogues are decent but repetitive dialogues that are focussed on the hero bring down the freshness factor. The second half is filled with many unwanted scenes which could have been chopped off without any second thoughts.

A pre-climax episode which runs on a game played by the family, Lock your age is a total let down and tests the patience of the viewers. As if the forced-in emotions were not enough, this pointless episode further adds to the miseries.

The movie features only 2 songs and both of them sound good. The montage song that comes in the second half has a repeat value and has been executed well. The background score is fine, but one may feel that a few scenes could have come out even better if proper care was taken towards the re-recording. The production values are sleek and that makes the movie look more colourful.

Interestingly, the camera work is below par as the shaky visuals are not pleasing to the eye. The director, Sundar Surya took a promising story and started off things on the right note. Sadly, his urge to pump the movie with emotional episodes plays the spoiler part here. His intention of giving a family message has been overshadowed by the unnecessary emotional track between the key characters.

On the whole, Amammagarillu is a routine family drama with a few good moments here and there. The makers bank heavily on the family audience and try to cook up an emotional family drama that closely resembles  Shathamanam Bhavathi. But somewhere down the line, these emotions go off track a bit and run at a sluggish pace during the second half.  All those who like family dramas can give this film a shot only if they have nothing else to do.