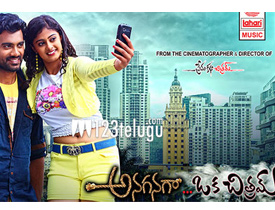 Soma Raju(Shiva) is a careless youth who takes the responsibility of clearing all his girlfriend’s(Megha Sri) financial problems. Left with no choice, he along with his friend, kidnaps a rich man(Sayaji Shinde) from a bar.

To their bad luck, the rich man turns out to be the DGP of Hyderabad. Hell breaks loose and a scared to death Shva decides to hand over the DGP to the police. Right when is about to do so, a dreaded naxal group kidnaps the DGP along with Shiva and his gang.

Rest of the story is as to how Shiva sorts out things and releases everyone from the naxals trap.

One of the basic plus point of the film is Vennela Kishore. He is the sole actor who gives his best and tries to salvage the film single handedly. His character has been written quite well and evokes some comedy whenever he is around.

Prabhas Seenu does his job well and tries to induce some laughs during the first half. Hero Shiva has nothing much to do and plays his part to the best of his capabilities. Megha Sri looks good but has no scope for acting. Sayaji Shinde and Suriya perform their roles extremely well.

This film has absolutely no direction as the proceedings move aimlessly throughout the film. None of the characters including the hero has any weight in the film. Characters keep coming in at regular intervals and irritate the audience big time.

First half of the film goes for a toss as some illogical scenes and idiotic narration take center stage. Pace of the film is painfully slow as the proceedings take for ever to wrap up. The pre-climax, Pruthvi’s entry and his silly comedy makes matters worse for the viewers.

Songs of the film are a bit decent and have also been shot well. Editing is horrible as at least 20 minutes of the film could have been chopped off blindly. Screenplay is a huge let down as the proceedings have absolutely no clarity and any meaning.

Coming to the director Prabhakar Reddy, he makes a huge mess of a decent story line. The film which looks good on paper is murdered by his hugely let down execution. Not once during this film, you get to see something interesting.

On the whole, Anaganaga Oka Chitram is a huge let down in the form of its execution. Except for Vennela Kishore’s sincere approach, there is nothing much to look forward in this lack lusture film and can be safely ignored this weekend.