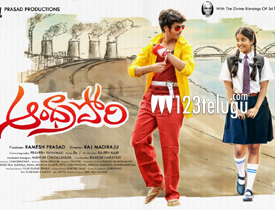 After doing some interesting roles as a child artist, Puri Akash is now making his debut as a ma​in lead in a teenage love story ​tiled ​Andhra Pori. ​Also starring Ulka Gupta, this film has hit the screens today. Let’s now see how the film is.

​Nizamabad Narsingh(Akash Puri) is a tenth fail middle class Telangana boy who falls in love with a girl named Prashanthi(Ulka Gupta) from Andhra​. He slowly starts wooing her and after a point, even Prasanthi says yes to Narsingh.

The couple spend some precious times together and twist in the tale arises when Prasanthi’s parents come to know of their daughter’s affair. What will they do now ? How will they deal with this problem ? and what happens to the couple at the end ? That forms the rest of the story.

​Premise of the film is pretty decent​.​ The way love track has been set amidst a ​unique couple ​is also good. Puri Akash ​makes a decent ​debut as the main lead. This young ​lad looks and suits his role perfectly. Akash is particularly good with his emotions in the climax and manages his Telangana accent quite well.

Ulka ​Gupta also does a decent job. She gives wonderful expressions ​during the emotional scenes and suits the ​entire set up well. The guy who did the role of heroine’s father is pretty good in his role. The way his character has been designed looks realistic and gives a lot of depth to the film.

​Aravind Krishna is ok in his cameo and so is Srimukhi. ​​The innocence that is showcased between the lead pair in a few scenes looks good. ​Second half of the film is slightly better when compared to the first.

​One​ of the major drawbacks of the movie is the pace with which the film moves. Even though it is a simple love story, the film moves at a snail’s pace. First half of the film takes for ever to finish and has many boring moments. The plot gets predictable after a point and there is nothing much interesting to watch out for.

The love story of the young school going couple is dragged to unnecessary extents in certain scenes. There is also no clarity during this time and songs cause a huge hindrance to the flow of the film. Story is quite routine and has been dealt many a times before.
​
Yet another drawback is that the film lacks emotional depth. After a point of time, the relationship between the couple is overshadowed by some cleashed moments. Even though the film has ​some interesting moments here and there, one gets a feel that there is something missing in the plot.

Camera work is pretty good and shows the rural atmosphere well. Screenplay is a bit slow as many scenes during the first half take for ever to finish. This film clearly lacks the simplicity and emotions which the original had. Dialogues written for Akash are very good and sound humorous too.

Music is just about ok as the songs in the first half could have been easily edited out. Coming to the director Raj Mudiraj, he has managed to set the tone of the film well but falters to bring in necessary emotions. He makes the narrative tedious and opts for a routine and predictable screenplay.

On the whole, Andhra Pori marks a decent debut for Akash Puri. This young actor has a bright future and would be good if he takes a break and comes back well trained in all departments. A boring first half and dragged out narration are the biggest drawbacks of this film. All those who like teenage love stories might end up liking it, but for the rest it is strictly a below average affair.