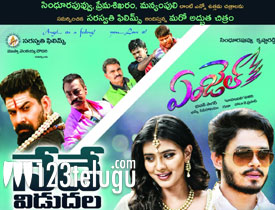 Angel is one film which has been in the making for quite some time now. The film which has Nag Anvesh and Hebah Patel as the female leads has finally hit the screens today. Let’s see how it is.

Nani(Nag Anvesh) is a small-time smuggler who comes across a holy angel called Nakshatra(Hebah Patel). As time passes by, Nani and Nakshatra fall deep in love and start spending quality time with each other. This is also the time when Nakshatra’s dad gets upset with her and sends a special person(Kabir Singh) to bring her back to their fantasy world. What will Nakshatra do now? Will she go back to the place where she came from? How will she convince everyone about her existence? That forms the rest of the story.

Hero Nag Anvesh does a decent job in the film. He has improved a lot from his first film and this shows on screen through his body language and expressions. Sapatagiri’s comedy works during the pre-climax and evokes decent laughs.

Hebah Patel is pretty good and the mainstay of the film. Her performance as the Angel has helped the film to an extent. Supporting actors Shayaji Shinde and Pradeep Rawat do their roles convincingly.

Kabir Singh is also impressive as the bad guy. Production values of the film are quite rich and especially the socio-fantasy elements have been executed by Ethnic Creative Studios Hyderabad superbly.

Being the central character, heroine Hebah’s role is quite disappointing. The basic reason for her arrival to the earth has not been established well and the scenes that showcase all this have also not been showcased properly.

The love track between the lead pair is below average and does not add any weight to the film. Even though Spatagiri’s comedy evokes good fun, rest of the times it bogs you down.

The pre-climax of the film is also not convincing at all as Kabir Singh’s role fluctuates mostly and has been showcased in a very weird manner.

Music by Bheems Cecerelio is below average and has nothing much to talk about. Background score is just about okay. Camera work is decent as it depicts the VFX work and other socio-fantasy elements well. Editing is sharp and so was the entire set up. Coming to the director Palani, he has done just an okay job with the film. He chose a very old school storyline of an Angel coming down to the earth and mingling with the regular people but all these scenes have been narrated in a very routine and outdated manner.

On the whole, Angel is just an okay socio-fantasy entertainer which has some moments here and there. Hebah Patel’s performance and some good visuals are basic assets for the film. On the flip side, the film has a regular story and an even routine narration which spoil the fun most of the time making this film a below average fare this week.