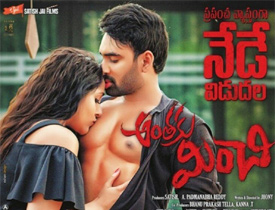 Anthaku Minchi built up decent expectations for itself as the trailer showcased the glamorous side of happening TV host, Rashmi Gautham. Let us check whether the horror drama lives up to its expectations or not.

Raju(Jai) is a happy-go-lucky guy who dreams of becoming a millionaire. He comes to know that he can earn 5 crores if he manages to prove the existence of supernatural forces. He sets all his focus on finding a ghostly creature and to his surprise, he notices some weird happenings in his sister’s house and strongly believes that he found what he has been looking for.

In this process, Priya(Rashmi) meets Raju and denies all his claims regarding the existence of any such unearthly force. Can Raju gather enough shreds of evidence to prove his claim? Will he win the 5 crores prize money? Watch the movie on big screens to know the answers.

Well, this is that one odd day you have to dig deep in order to find something good about a movie. The horror drama has very few things going its way and Rashmi would be the pick of the lot. She puts up a glamorous show and impresses with her wicked performance in the climax.

The movie has an efficient supporting cast who try to keep this movie on track. Comedian Madhu provides some much-needed relief on a few occasions in the first half with his engaging comedy.

The male lead, Jai goes over the top a bit too frequently. He does not look comfortable in front of the camera and has a thing or two to improve if he needs to continue his acting career.

The graphics that have been used in the movie are of least possible quality and give a cartoonish vibe to the proceedings. The viewer will not feel a thing when the ghost is seen on the screen and that pretty much sums up the entire story.

The subsequent explanations that have been given to supernatural incidents are a million miles away from practicality. Even a second standard child can find faults in the logics.

The climax is a total let down as the director and writer did not have a single clue about how to end the movie. These sequences look comical, let alone the concept of horror or novelty.

The director, Jhony tried to infuse comedy with horror but the execution went haywire. The storyline has nothing new to offer and the illogical screenplay makes things even worse.

The movie was made on a shoestring budget and the uber-poor graphics are a perfect example for the same. Also, the camera works are a bit shaky and these blurry visuals damage the viewing experience. The background score is below par and so are the songs in the movie.

On the whole, Anthaku Minchi is an illogical horror drama that makes very little sense owing to its lackluster storyline and patchy narration. The story takes so many unconvincing twists and turns that the viewer loses track mid-way and is made to sit through a painfully long climax. Rashmi tries her best to keep things going with her glamorous screen presence but what follows are pointless sequences which literally test your patience. Stay away from this one and look for something else interesting this weekend.