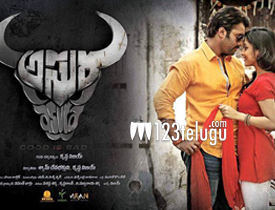 Talented hero Nara Rohit, has been synonymous with some interesting films in the past. He is now back with yet another action entertainer Asura. Directed by Krishna Vijay, this film has hit the screens today. Let’s see how it is.

Dharma Teja(Nara Rohit) is a duty minded and shrewd jailer who always abides by the law. One fine day, a dreaded convict named Charlie(Ravi Varma) is brought to the jail to undergo his death sentence.

Twist in the tale arises when Charlie plans something big and decides to escape his hanging. How does Charlie go about it ? and Whether Dharma manages to stop him from escaping his sentence forms the rest of the story.

Once again, Nara Rohit proves his penchant for different cinema. Time and again, he has backed unique scripts and Asura will finally bear fruits for him. Right from the story line to the narration, things work out well for Rohit in this flick. He gives a tremendous performance and holds the film together. As usual, his base voice is a huge asset and all the dialogues that he mouths are superb.

Even though heroine Priya Bannerjee does not have much to do, she looks good in her part. The entire hanging episode in the jail and the interval block are the major assets of the film. Screenplay is yet another bonus and makes up for a gripping narration. The twist that comes during the climax is pretty cleverly executed.

The surprise package of the film is Ravi Varma, who looks menacing as the bad guy. He gets to play a meatier role and grabs the opportunity with both hands. His confrontation scenes with Nara Rohit have been designed exceptionally well.

Asura has its fair share of flaws here and there. After an intense first half, things slow down a bit during the initial part of the second half. Nara Rohit looks a bit hefty in certain scenes and needs to work on his looks. Pace of the film drops down slightly during the second half.

As said earlier, heroine Priya Banerjee has nothing much to do except for appearing in songs. The third song in the first half could have been totally avoided to make the film even more crispier.

Certain logics go missing in the film, and the romantic track deviates the film slightly. This is not the film for all those who expect popcorn entertainment.

Asura is quite high on technical aspects. Camera work is outstanding and gives the film a rustic look. The locations chosen for the jail surroundings and the entire set up looks outstanding. Music is good and goes with the flow of the film. Screenplay is the biggest asset and the crisp run time helps matters much.

Dialogues need a special mention as they have been written with a lot of depth. Editing is decent but a song and certain fights could have been trimmed a bit. Coming to the director Krishna Vijay, he has done a wonderful job of sticking to his plot and narrating the film in an gripping manner. The way he executes this unique script keeping in check with the commercial aspects is impressive.

With Asura, Nara Rohit once again proves his taste for different cinema and brings us a gripping thriller. Interesting story line, taut screenplay and a racy first half are huge assets for this film. If you manage to ignore the small hiccups during the second half and go with no expectations, Asura will be a very unique and interesting experience for all those who like watching intense thrillers.