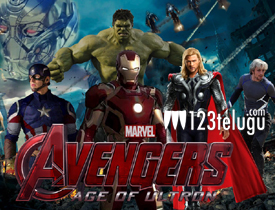 The Marvel franchise has been bringing superhero movies with regular consistency and the strategy is working well at the Box Office. Avengers: Age of Ultron is a sequel to the 2012 movie Avengers and brings back the star cast. Let us see how it is.

SHIELD is dismantled in Captain America : The Winter Soldier. After this, the Avengers are on their own and Captain America loosely takes charge. Tony Stark (Robert Downey Jr) funds the group’s operations and equipment. But he is not happy.

He decides to create Ultron, as a shield of robots for earth against Alien invaders. But Ultron quickly becomes self sufficient and it decides to make the Human race extinct, to save the planet from destruction. It hacks into every missile labs and robotics company to steal every piece of technology and equipment available.

It also uses the twins Quicksilver and Scarlet Witch to destroy the Avengers from within and for sometime , this strategy succeeds. The Avengers must now find a way to beat Ultron and stop its plans of human extinction.Can they do it. Of course they can, they are the Avengers.

A nice new romantic thread involving The Hulk and Black Widow delivers some of the best moments in the film. There are lots of action sequences and tons of robots flying around in the movie. Fans of these sequences will be thrilled. The Iron Man vs Hulk battle has been shot well.

The movie has no soul. There is no riveting screenplay to back up the action. In Avengers part 1, the action had a great subplot and the pace was fantastic. In this edition of the Avenger, that is missing.

The main thread of Ultron going rogue is very old and predictable. In fact, our very own Rajinikanth did it in ‘Robot’. The strategy employed by Ultron for earth’s destruction is not very effective in terms of shock value.

The length of the movie becomes painfully obvious after a point and there is nothing much to hold your attention. Even the climax fight is not ‘Avengers’ worthy.

Special Effects team did a very nice job and the graphics work in the movie is top notch. You can’t make out any artificial shots even if you try hard. 3D effects are just about ok. Background music complements the scenes well.

Joss Whedon’s direction is a bit of a hit and miss. Some scenes are nice but the overall movie lacks the soul of the original. Avengers Part one was almost a masterpiece when it comes to packaging a superhero film. This is not the case here.

Avengers : Age of Ultron is a decent film but it is not a worthy sequel to ‘The Avengers’. It is not as entertaining and that is the biggest flaw of this film. There are action scenes that will satisfy hardcore fans. Watch it with very low expectations.