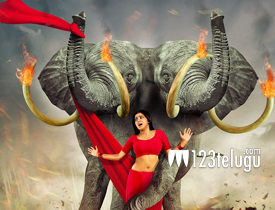 Avunu was one of the biggest hits in Ravi Babu’s career. He is back with its second part in Avunu 2. Starring Poorna and Harshvardhan Rane, this film has hit the screens today. Let’s see how it is.

As shown in the first part, Mohini(Poorna) and Harsha(Harshvardhan Rane) some how escape the evil spirit of Captain Raju(Ravi Babu) and shift to posh flat in the city.

One fine day, they travel to Kasi and meet a sadhu who gives Mohini a sacred thread to stay safe from the evil spirit. The couple return home and start living happily. Twist in the tale arises when Captain Raju’s spirit returns to haunt Mohini yet again.

How will Mohini escape from this evil spirit ? Will the sacred thread help Mohini in saving her life ? To know answers to these questions, you need to watch the film on the big screen.

Major credit should go to Ravi Babu for executing the film in quite a decent manner. The production values are wonderful and showcase the film in a superb light. Once again, Poorna is the center of attraction of the second part as well. She portrays her role quite convincingly and brings in a lot of depth to the film.

The location chosen and the technology used in the film is very good. Graphics showcased are quite natural and have been designed convincingly. Harshvardhan Rane has improved by leaps and bounds with his acting skills. The way he has gone about his role is impressive. He is particularly good in one of the scenes where he is tied up to a chair.

Second half of the film is quite racy as the intensity in the proceedings is raised with these gripping scenes. Yet another plus point of the film is the run time. As the film is only 1 hour 40 minutes, things move at a brisk pace.

Major drawback of the film is the lack of spooky moments. All those who have seen the trailers and go in thinking it is a horror film will be mistaken completely. Avunu 2 is a suspense thriller which is predictable most of the times.

First half of the film is routine and has the same concept which Avunu had. Those who have seen the first part might get bored during this time. Climax of the film is quite simple and hurried up a bit. Ravi Varma’s character goes over board during the first half.

As said earlier, production values of the film are brilliant. The house chosen and the way Ravi Babu uses its every nook and corner is very good. Background score is the main ingredient for any horror flick, but sadly, it is the biggest drawback of Avunu 2. The score composed gets irritating after a point and haunts you till the end.

Coming to Ravi Babu, he does not experiment much and showcases decent thrills in the film. The way he has paced the entire second half will be liked by one and all. Editing is sleek and suits perfectly for films in these genre.

On the whole, Avunu 2 has some well executed and engaging moments. The premise chosen, the second half and decent performances from the lead cast are basic assets. All those who have seen Avunu might have their restrictions about the first half. But for those who haven’t seen it, this film can be given a shot and is easily worth their precious time.