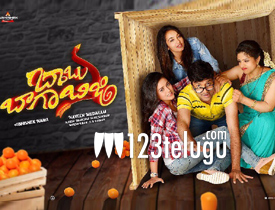 Right from the time the project was announced, Babu Baaga Busy was the most talked about because it was the remake of the hit Hindi film Hunterr. It was a brave decision to remake this adult comedy in Telugu and we need to see whether such kind of films work at the box office or not.

The story of the film is based on the life of Madhav(Srinivasa Avasarala) who is a s.. addict. After having a number of affairs in his life, Madhav finally decides to settle down with Radha(Misthi). But things are not that easy as his controversial past keeps getting back to his current life time and again. Rest of the story is as to how Madhav clears all his problems and finally marries Radha.

Even though Srinivasa Avasarala is a misfit in the character of a sex addict, he tries hard to carry the film on his shoulders. His performance in some emotional scenes is just about okay. Sreemukhi is very good in her tiny role. Mishthi is just about okay and so was Aadarsh Balakrishna.

Supriya, who plays the married woman looks pretty and will attract some front benchers with her looks. Her episode is the only thing which has been showcased in somewhat interesting manner post the interval. There are certain scenes which the youth might get associated strongly.

BBB is a badly made remake of Hunterr. The basic essence of the film is lost in translation as the emotions are spoilt completely. When you pick up an adult comedy, either you should fill the proceedings with good sensuous scenes or comedy but this film sadly lacks both and falls flat. There are way too many subplots in the film which have been executed in a boring manner.

Right from the beginning of the film, the hero’s character is not established properly and one would hardly believe that the main protagonist is a sex addict. The film goes down as Srinivasa Avasarala looks misfit as a playboy. Even though he impresses acting-wise, his soft image completely obstructs the entire theme of the film.

The narration is so bad that none of the affairs shown in the film are impressive. Tejaswi should stop doing these blink and miss roles as they will surely hamper her career. The entire first half is very slow with the unnecessary flashbacks of the hero being showcased in a shoddy and over the top manner. The climax of the film is also not convincing as the film ends in a hurry.

The film has way too many songs even though they come as montages. The background score is pathetic and does not elevate the film one bit. Production values are just about okay and so was the camera work. Editing is okay and so were the dialogues. The screenplay of the film is a setback as the manner in which the scenes flow can irritate you.

Coming to the director Naveen, he has done a disappointing job with the film. Had he made the film realistically, things would have been better. But he adds an emotional angle and tries to please everyone with some outdated commercial scenes. He has lost a wonderful opportunity and nose dives the film with his below par direction.

When Tollywood audience is evolving by accepting different kinds of films these days, the makers of Babu Baaga Busy had a good chance of taking the adult comedy genre to the next level. But sadly, this film has neither interesting adult content or the necessary comedy. This remake gone wrong has some romantic scenes which will be liked by the youth but for other audience, this film ends up as a horrible and disappointing watch this weekend and will surely get washed way in the huge wave of Baahubali.