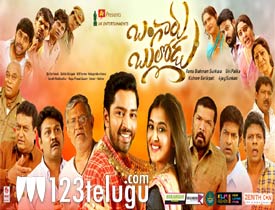 Bangaru Bullodu is a film that has been awaiting for its release for a long time now. The film has finally hit the big screens today and let’s see how it is.

Bhavani Prasad(Allari Naresh) is a bank employee from a small town who is facing issues with his brothers. His grandfather cheats on the village temple ​authorities by robbing the jewelry for personal use. To fix this, Bhavani Prasad uses the jewelry that is kept in his bank for ​gold ​loans. Things get serious when the ​actual jewelry owner(Posani) ask​s​ back ​the gold. How will Bhavani manage all his problems forms the rest of the story?

It was really good to see Allari Naresh on screen after a long time. Comedy comes naturally to him and Naresh does a good job in the film. He plays the sheet anchor’s role well. Comedian Praveen gives him able support. Satyam Rajesh and Prabhas Sreenu do well as useless brothers.

Tanikella Bharani gets a good role and he is good in his emotional avatar. Ajay Ghosh and Adhurs Raghu are okay. Posani is yet another pillar of the film and he is quite good with his punch dialogues and satirical comedy. The village set up is pretty good as the production values are quite impressive.

The first half of the film has a neat screenplay and an interesting storyline. The basic plot is established well with neat emotions during this time. Heroine Pooja Jhaveri looks pretty and does her role well. 30 Years Prudhvi shines here and there.

Once this happens, things go for a toss. Upon this, the romantic track is forced into the narrative for no reason and this is also a big drawback as it lacks sheen and any novelty.

Yet another drawback is that the climax which is ended in a jiffy. With just one or two basic scenes the twist is revealed and the film is wrapped up giving the audience a very abrubt effect.

As said earlier, the production values are pretty good. Music is decent and so was the BGM. The dance in the Swatilo Muthyamantha remix song is good. Dialogues are quite funny and suit the nativity well. Editing is below par as the romantic track should have been trimmed.

Coming to the director Giri, he has done a half-baked job. He starts the film well, neatly introduces the key characters and plot, but goes haywire in the second half. His story did not have weight and that is the reason he introduces silly scenes and forced comedy which irritates the audience.

On the whole, Bangaru Bullodu is a half-baked comedy that clicks in the first half with a neat premise and interesting narration. But the second half goes down with forced comedy and unnecessary scenes. The film is a typical village drama that reminds you of the 90’s with some earthy characters. If you love such films give this film a shot but there is nothing special or novel in it to enjoy.