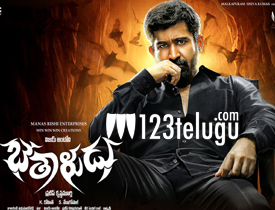 Vijay Anthony has become a huge sensation after the success of his last film Bichagadu. He is now back with his new film Bhetaludu which has hit the screens today. Let’s see how it is.

Dinesh(Vijay Anthony) is a senior software engineer who leads a happy life with his wife Aishwarya(Arundhati Nair). The twist in the tale arises when Dinesh starts hearing weird voices from his brain which ask Dinesh to kill himself.

Things get so serious that Dinesh’s life gets disturbed completely and he is joined in a mental hospital. There, during his treatment, the doctors find out that he is suffering from a problem which is related to his ancestral past.

What is that problem ? What does it have to do with Dinesh’s current life? and How does Dinesh manage to come out of this tricky situation ? That forms the rest of the story.

The story of Bhetaludu is quite new. The way things featuring Vijay Anthony and his past are executed is pretty good. Once again, Vijay does supremely well in his role. Right through the movie, he showcases some stunning emotions and is amazing as the man who gets mentally disturbed.

The first half of the film is super gripping and suspense filled. You never know what turn the film will get into as the director narrates the proceedings in quite an innovative and interesting way.

Heroine Arundhati Nair is riveting as the female lead. Her role is very strong and she has done an amazing job. Background score by Vijay Anthony elevates the film to another level.

Bhetaludu is tightly gripping till the first fifteen minutes of the second half. But when the actual reason is showcased as to why all these weird things are happening, things go wayward. The film loses steam and becomes a bit slow. There is not much horror in the film and all those who think Bhethaludu will have horror elements can get disappointed.

At least a major section of the audience can get turned off with the manner in which things are ended. The climax of the film is also a bit jaded and is dragged for no reason. Too many cinematic liberties have ben taken which will arise many questions in the audience minds.

Vijay Anthony’s production values are top notch. The locations chosen, and the set up featuring the old village in the first half have been showcased quite nicely. Music is very decent and as said earlier, Vijay Anthony’s background score is very good. Dialogues are neat and so was the camera work.

Coming to the director Pradeep, he has done an okay job with the film. His screenplay needs a special mention during the first half as many scenes are interlaced with different twists and turns. However, he lets go of things during the later part and makes the film predictable and slow. It is a catch 20-20 situation where a particular section might like what is showcased depending on the flow of the film. But at the same time, it can disappoint many who expect something very interesting after all the suspense filled proceedings.

On the whole Bhetaludu is a film which has some very gripping moments. The storyline and execution are quite new and makes things interesting for the entire first half. However, a slow and a bit over the top climax can spoil the fun completely. If you are tired of the regular masala entertainers which are churned out every week, you can easily give this film a shot which is a bit different and ends up as a time pass watch this weekend.