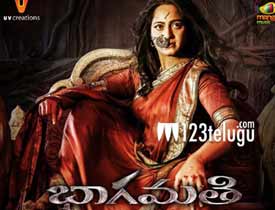 Anushka Shetty’s horror thriller, Bhaagamathie has been promoted quite aggressively all over. Directed by Ashok, the film has hit the screens today. Let’s see whether the film manages to impress us or not.

Eshwar Prasad(Jayaram) is an honest minister who appoints Chanchala IAS(Anushka) as his personal secretary. As time passes by, he opposes the high command for a cause. In order to pull him down, the government targets Chanchala. They take her to an undisclosed location called Bhaagamathie bungalow. Upon their investigation, they get the shock of their lives when they start to see Chanchala behaving like Bhaagamathie. Who is this Bhaagamathie? What does she have to do with Chanchala? and what is the twist behind the whole political set up? To know the answers, you need to watch the film on the big screen.

Undoubtedly, Anushka is a major highlight of the film. Her screen presence and performance brings a lot of depth to the proceedings. She has shown tremendous variations in both her roles but she is exceptional as Bhaagamathie. Especially, Anushka gives a riveting performance during the interval block with her fierce looks and dialogue modulation.

The various twists that come throughout the film are good. Also, the way these twists are revealed one after the other during the end has been dealt well. The interval bang has been handled quite effectively. The pre-climax where the​​ ​main twist is revealed elevates the film quite​ nicely.

Jayaram does a decent job and is pretty impressive as the minister. All his scenes with Anushka during the second half have been executed well. Unnikrishnan Mukundan does what was required of him. Murali Sharma’s performance as a cop was also good. Asha Sarath who played the CBI officer did justice to her role.

Though the first half of the film starts on an interesting note. it falls flat after ten minutes and further proceedings look a bit dragged with slow-paced narration. Until interval, nothing much happens in the first half.

Once the twists are revealed in the pre-climax, things become predictable and are unnecessarily dragged to an extent. The film has a familiar plot and there is nothing new story wise.

Noted comedians Dhanraj, Prabhas Seenu and Vidyullekha are not used properly as there was a good scope of comedy in the first half.

Production values for the film are top notch. As most of the film happens in a bungalow, the set work and ambiance look pretty good. Art director Ravindra has worked hard and his detailing appears on the screen. Background score by Thaman is pretty impressive and creates the necessary effect. Editing is okay but a few scenes during the first half could have been chopped off. Cinematography by R. Madhi is top notch as the color texture and framing used elevates the film’s mood completely.

Coming to the director Ashok, has done a decent job with good twists and turns. Even though he chooses a routine story, the way he executes it is decent. The way he adds a crime angle to the horror effect is good. If he could have narrated the first half on an entertaining note with some comedy, things would have been even better.
Verdict:

On the whole, Bhaagamathie is an engaging thriller with good horror and ​interesting twists at regular intervals. Anushka leads from the front and will surely pull the crowds with her standout performance. The film is made on a lavish scale and because of this, the thrills look quite good on screen. But the story is familiar and the first half gets a bit slow. If you ignore these aspects, Bhaagmathie ends up a pretty decent watch watch this weekend.​ Go for it.