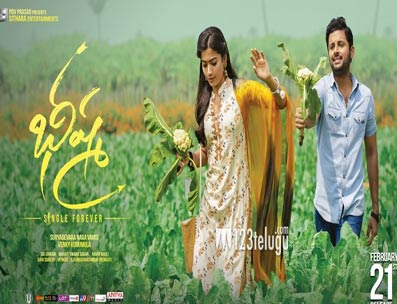 Nithin is back after a gap of one and half years with a film called Bheeshma. The film is out today and let’s see how it is.

Bheeshma(Nithin) is a careless youth who falls in love with Chaitra(Rashmika), a senior employee in Bheeshma group of organic farming. The twist in the tale arises when Bheeshma is appointed as the CEO of the company all of a sudden. Why is Bheeshma appointed as CEO all of a sudden? Is there a back story to Bheeshma and the company? What will happen to his love story? To know this, you have to watch the film on the big screen.

Nithin gets a very good role after a long time and does a superb job. His comedy timing is hilarious and the way he delivers the comedy punches with good expressions is the biggest plus points of the film. His chemistry with Rashmika is also top notch.

Director Venky Kudumula has given Nithin a good character and showcased him in a complete avatar filled with comedy, fights, and dances. Rashmika is also neat in her role and gets a good role. She has danced well in the film.

Vennela Kishore once again gets a very good role and as always he gives a impressive performance. All his scenes with Nithin and Raghu Babu have been executed quite well. Kannada actor Ananta Nag is quite good in his role and brings a whole new depth to the film.

The film is filled with good doses of comedy and has been nicely inserted at regular intervals. The tunnel comedy is hilarious and works well. Sampath Raj was effective as the cop and his scenes with Nithin also evoked good comedy.

The story line is quite simple and there are not many twists or turns in the film. The concept of Organic farming is started on a good note but nothing much is said about it in the latter part of the film.

There are a few scenes which look over the top. Bengali actor Jitusen Gupta is good in his role but his track is not that effective in the film and could have been better.

Production values of the film are top notch and the neat camera work enhances the visuals quite well. Sagar Mahati and his impressive music score is another advantage to the film. Dialogues are super fun and the screenplay is also quite witty and narrates the film in a breezy way. Nithin has been styled well.

Director Venky Kudumula is surely a talent to watch out for. His previous film Chalo had good entertainment and he chooses the same with Bheeshma too. Taking a simple story of organic farming, the way he added good humor made the film click at regular intervals.

On the whole, Bheeshma is romantic comedy which has well packaged entertainment thrown at regular intervals. Clean comedy, good performances and breezy narration are huge assets of this film. Nithin will get his much deserved hit he was looking for. Except for a simple story line and some over the top scenes, this film has some good moments for the entire family to watch out for. Recommended.