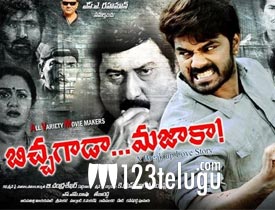 Among all the low budget films which have released today, Bichagada Majaka is one interesting film. Let’s now see how the film turns out to be.

Siddhu(Arjun Reddy) and Avani(Neha Deshpande) fall in love with each other and spend some cozy times together. But their love story does not go well with Avani’s dad(Suman). Left with no choice, he lays a weird condition to Siddhu in order to marry his daughter. What is that condition? and whether Siddhu fulfills it or not is the rest of the story.

Hero Arjun Reddy makes an impressive debut and is good as the main lead. He does not overact and is true to his character throughout the film. Pooja Deshpande is also neat in her role. Glamor wise, she was just about okay but her performance is apt and suits the nature of the film quite well.

Senior hero Suman was perfect as the rich businessman who loves his daughter. We get to see Babu Mohan after a long time through this film and he provided the necessary laughs here and there. Dhanraj and Raju were okay in their respective roles.

One of the basic drawbacks is that the film lacks freshness. The love track is boring and has nothing new to showcase. The second half is the place where the proceedings get sidetrack with idiotic and silly scenes which bore the audience.

The manner in which the lead pair decide to sacrifice their love for the society looks good on paper but has not been transformed well on screen. Songs are a big drawback and disturb the flow of the film. The screenplay goes for a toss and the low production values make things even worse for the audience.

Editing by Martand K Venkatesh saves the boredom to an extent with his crisp editing. Music by Sri Venkat is pretty ordinary as none of the songs make sense or sound good. Camera work was so-so but the production design was okay. Coming to the director Nageswara Rao, he has done a pathetic job with the film. He could not develop a proper script irrespective of having a good point. His narration was even worse and made the film go downhill.

On the whole, Bichagada Majaka is an ordinary breakup love story which has nothing new to offer. The lead pair tries to make things work with their sincere performance but the narration is not gripping and bores the audience completely. Ignore the film this weekend and look for something else interesting.