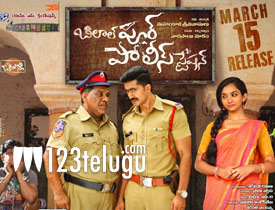 Continuing the trend of low budget films, yet another film which has hit the screens today is Bilalpur Police Station. Let’s now see if this film has anything interesting in store for us or not.

Surya(Maganti Srinath) takes charge of Bilalpur Polie Station as a sub-inspector. One fine day, he gets a case of robbery and starts investigating the case. To his surprise, another case of a missing girl gets registered in the same police station. What is this robbery all about? Who is this missing girl? Do both these crimes have a connection? To know all this, watch the film on the big screen.

Hero Maganti Srinath makes an impressive debut. He looks apt as the police officer and has done well in the emotional department. His performance in key investigating scenes was very good. Heroine Meghana was also okay in her role. Though she did not get much screen time, she made the most of her crucial role.

Goreti Venkanna, who did a crucial role was also neat with his performance. His dialogue was very good and created a good effect to the film. Rest of the supporting cast also did fairly well.

The first drawback is that most of the time is taken to introduce the key roles in the film and this is where the film begins on a dull note. As the director took his own sweet time just to elevate the characters, he wasted key run time of the film. The emotional connect was missing in many areas.

The narration lacks basic flow and this is where the film takes a beating in the second half. Upon this, comedy scenes do not work at all in the narrative. Key scenes of how the parents are feeling helpless after their daughter goes missing should have been added to make proceedings more interesting.

The camerawork is decent enough and so were the production values. Editing was disappointing as a chunk of the scenes could have been chopped off. Music of the film is just about okay. Coming to the director Naga Sai, he did a poor job with the film. He did not work much on the script and this is shown in the way the proceedings were executed in the second half.

On the whole, Bilalpur Police Station is a slow and boring cop drama which misses the flow in many areas. The emotional connect is also missing in major areas and this is where the audience gets bored most of the time. Except for a since performance from the hero Srinath, this film has nothing to offer and can be left alone this week.