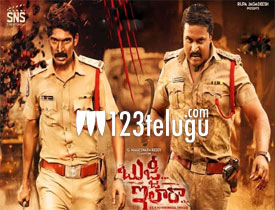 Dhanaraj turned hero for the film Bujji Ila Raa. Sunil played a key role in this film. The promotional material released has succeeded in attracting viewers. Let’s see if the movie managed to do the same or not.

In the city of Warangal, the serial kidnappings and brutal murders of 8-year-old girls become a complex issue for the Police department. The hearts of the murdered children go missing. Keshava (Dhanaraj) who comes as the new CI to the city’s two-town police station is given the responsibility to investigate the case. Who is committing these heinous crimes on children? Did Keshava chase down the case? What is the role of Khayyum (Sunil) in this story? Well, you need to watch the film to know the answers.

Though the film’s story isn’t novel it manages to generate curiosity and interest among the viewers. This is a psychological crime thriller and there are decent number of scenes that bring the balance to this genre. Some scenes are pragmatically dealt with.

Towards the mid of second half proceedings hold the key with a few gritty moments. The manner in which the main story unfolds with the revelation of twists is good and hooks the viewers. Dhanaraj and Sunil were decent and they did what was expected from them.

Chandini Tamilarasan is terrific and will surely stun one and all. In a few scenes, she delivered a high-rate performance and carried out the emotions superbly. She is undoubtedly one of the biggest assets. Srikanth Iyengar is once again at his usual best.

Well, the first half of the film isn’t handled well and this is a setback for the film. Had the investigative angle been taken more care of, the impact would have been multifold.

There is amateurishness at many places in the film. Few scenes were over-dramatized for no reason and they go way over the top making the film go downhill. The violence is something that can’t be viewed by all sections of the audience and the visuals are disturbing too.

Few scenes give us the impression that the Police officers’ roles are weakly written. A key character of the film keeps making fool of them continuously which looked very odd. The body language of a few artists didn’t fit in properly. After the twists are revealed the proceedings lack excitement. There are logic defying scenes in the film.

The BGM by Sai Kartheek is haunting. His astounding composition helped the film big time. In many scenes, his music became a huge plus and made the film intriguing.

The Cinematography by Anji is below-par and so are the production values. The editing by Chota K. Prasad is fine. Coming to G. Nageshwara Reddy who handled the writing and screenplay, he did a okayish job while the director Anji did a below par job with the execution even though the script has good potential Though some of the parts were handled very well, the team should have been more cautious with a few scenes.

On the whole, Bujji Ila Raa is a psychological thriller that only clicks to an extent. The film has a decent second half and below-par first half. The stunning BGM, fair performances by the main cast, and very good moments at certain intervals are its driving factors. On the flip side, clumsiness in places, exaggeration towards the end, and a few poorly written scenes are its stumbling blocks. You can give it a try provided you are okay with mentioned demerits.