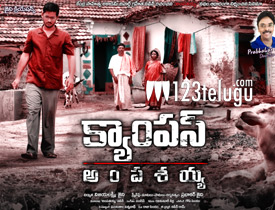 ‘Ampasayya’, the award winning novel has now been made into a full length feature film titled Campus and has hit the screens today. Directed by Prabhakar Jaini, let’s now see how this film turns out to be.

The film is set during the early 70’s in Hyderabad. Ravi(Shyam Kumar), who belongs to a small village comes to Hyderabad and joins Osmania university to pursue his higher education. Things seem to go fine until one day when Ravi suddenly starts getting mentally depressed and spoils his health.

What happened to him suddenly ? What is his depression all about ? and How will Ravi come out of it ? That forms the rest of the story.

The backdrop of the film is quite interesting and has been set in an interesting premise. Shyam Kumar who does the central character has done a decent job. The young actor portrays all the various tensions through his role well.

Pavani, who did the role of Rati is ok in her character. Some of the confrontation scenes between the lead pair during the second half have been executed well. The problems that rural villages in Telangana faced during early years have been showcased well.

One of the biggest drawbacks of the film is the lack of hardcore emotions. The novel from which the film was made had strong emotions but sadly, they are completely missing in this film. There are many scenes which are quite repetitive and irritate the audience.

As the film happens in a day in the life of this youngster, there was a huge scope for the makers to showcase the proceedings in a thrilling way. But sadly, things go haywire as these important factors are pushed aside. Climax of the film is also not convincing and has been wrapped up in a hurry.

Director Prabhakar Jaini chooses a novel concept but fails in his execution completely. Whatever feel and grip the novel had, is totally missing in the film. Neither the emotions or pain of the young man have been showcased convincingly in the film. Production values are pretty good and so was the art direction. Music was just below average and so were the dialogues.

Whenever you make films based on famous novels and hard hitting subjects, one should be very careful in executing them perfectly on the big screen. But sadly, the makers of Campus fail to narrate the film in a gripping manner and miss out on major emotions making this film a tedious watch this weekend.