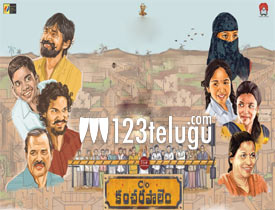 A small film called Care of Kancharapalem has been making a lot of buzz ever since Rana Daggubatti announced that he will be presenting it through Suresh Productions. The film is releasing on 7th September and we have been to a special screening and bring you the detailed review much in advance.

The film is set in the native village of Kancharapalem which is conservative and has its own share of issues. From the love story of a 50-year-old unmarried man to a youngster who falls for a prostitute, this film showcases many other subplots. Different other stories like inter-caste love affair and a moving story of a sculptor are showcased in an interesting manner. What happens to all of them during the course of time is the basic storyline of the film.

To start off with, Care of Kancharapalem has its heart in the right place. The writing wins you over as no Telugu film in the recent times had so beautifully etched characters. Every role has a meaning and a backstory. The characters are real and one amongst us which we meet in our daily life.

What’s more beautiful is that the film has love, comedy, and deals with sensitive issues like caste system and honor killing in a mature manner without faulting anyone. Some harsh realities of today’s life are showcased in a realistic way. Credit should go to director Venkatesh Maha for connecting the dots so well that you laugh, cry and feel disturbed along with the characters on screen.

The way the mature love story of a 50-year-old is showcased through a lot of fun is what takes the cake. The performance and emotions from the new actors fill your heart with happiness. Praveena Paruchuri, the producer of the film plays a prostitute called Saleema and her work is quite appreciable. The way her story is narrated and the inhuman angle showcased in her story is quite moving.

A few stories have tragic endings and those twists have been written with a lot of thrill and make the viewer eagerly wait to find out what will happen to these characters as the film comes to an end. The locations, taking and feel-good nature of the film is what makes Care of Kancharapalem different from others. Most of all, the film projects emotions in a splendid way and that is where the film strikes a chord.

In such heartwarming films, it is hard to find many faults. But as the actors are quite new, it gets difficult to adjust to them during the first ten minutes of the film. Also, the film is devoid of all the regular commercial elements and a certain section might not like it.

Even though the story of a Brahmin girl falling in love with Christian guy is narrated well, there is a predictability factor in their story. As the characters are established slowly one after the other the film takes a slow start in the beginning.

The film is shot in sync sound which gives the proceedings an extra edge. The music will grow on you and the background score is impressive and elevates the simple mood of the film well. Editing is crisp as the film does not shift one bit to any unnecessary scenes. Many do not know that close to 80 people from the village have acted in the film. The makers have done a fabulous job in extracting performances from them. The production design, locations selected and the way the songs gel into the narrative is quite wonderful.

Credit should also go to Rana for backing a film like this which has no stars. If experienced people like him can support such films, our filmmakers will think big and make films which will cater to the international audience as well.

Coming to the director Venkatesh Mahaa, he makes a splendid debut in Tollywood. Even though he chooses a film which is offbeat, the characters are real and are executed in a very watchable manner. His writing has a lot of depth as it is very difficult to balance so many stories in one film and yet make one get connected to them. The way he chose his actors, extracted performance from them and narrated the film with moving emotions is truly award-winning work from the young filmmaker. Devoid of all the commercial aspects, he has chosen to tell a story which will stay with you even after you walk out of the theaters.

On the whole, Care of Kancharapalem is a realistic slice of life film which has its heart in the right place. Love, comedy, earthy characters and sacrifice, this film has it all and touches every emotion perfectly. Venkatesh Maha makes a terrific debut and is the one to watch out for. Films like these are the need of the hour and need to be supported so that Telugu cinema reaches greater heights. The film is surely devoid of regular commercial elements and is not for those who expect masala entertainment. But that will not stop you from liking it once you start watching the film as movies like these are rare and made with a lot of passion. Must Watch.